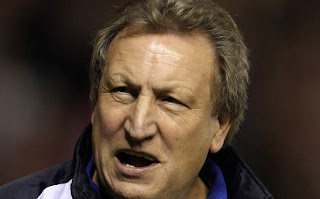 I know he's not everyone's cup of tea, but I like Neil Warnock.  After yesterday's 3-1 defeat at the hands of Tottenham Hotspur, Warnock had this to say in his post-match press interview:

"I found myself clapping when the third goal went in it was such a fantastic goal by Bale. It’s a pity he’s not English."

Neil Warnock is hardly immune from the usual post-match criticisms of referees and opposition players, but in a world of bland, nothing statements and unseen controversies, it's nice to see someone in football tell it how it is, even if that means saying something nice about one of your opponents.