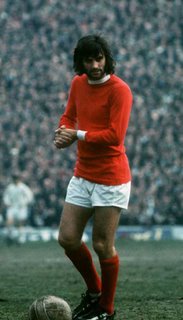 There will be plenty of stuff written about him over the next few days, and much of it won't be about football.

Let's do him the honour here of remembering him purely for his football.

The statistics won't do much to paint a picture, but here they are:

One of the greatest players the game has ever produced.

(there's a decent profile here)
Posted by swisslet at 1:56 pm

Where to start? He was certainly the best player to grace my club, despite those polls all throwing up winners like Cantona and Giggs....

He scored one of my top 5 favourite goals ever - remember the chest down and volleyed lob over Pat Jennings from about eight yards out?

Just a little genius. I'd go so far to say that he was the best footballer these islands have ever produced. We haven't had many European Footballers of the Year, and certainly none with so much natural talent.

We've lost a true great, there.

Such a shame...dare I say waste?

Yep, afraid I'm going to follow on from Alex and be a bit controversial here.

Brilliant, brilliant footballer - of that there's no doubt. As Lord B says, possibly the best (or at least most naturally gifted) footballer we've ever produced in Britain.

But I'm already sick of the protracted and hyperbolic eulogies. After all, he wilfully chose the course of self-destruction that eventually led to his death. What a waste.

I sort of wanted to avoid this discussion.......

1) Is alcoholism something that people choose, or is it a disease? I watched with the rest of you as Best got a second chance and a second liver a few years ago, and then watched as he fell off the wagon. I think we should be careful before we rush to judgement about how 'willful' he was about destroying himself.

2) He played over 400 times for Manchester Utd in a 10 year period. He won 2 league titles, the european cup and was voted European Footballer of the year. He did okay with his talent, I think. I know he was on the downwards slope from the age of 27 when he left old trafford, but how many people would want a career that glorious, with that much achievement?

I agree about the coverage though - the media has been circling around this story for years, waiting for this moment. I hate the judgmental tone of their coverage - they revel in his exploits and the "where did it all go wrong" stories, and they tut-tut about his drinking and his decline. I hate the lack of humanity of it.

I did not intend to start a controvery.

But it is a shame - imagine what greatness he could have gone onto, how many other players could have played alongside him and learnt from him, how many clubs could his genuis have helped as a manager and coach...?

He was a genuis - a NATURAL genuis because he did all that he did from the heart and not the mind. He didn;t need to think about playing, it came naturally and from within. As a footballer a true talent - an innate gift.

But it is still a shame when potential goes unfulfilled.

I have to disagree with Alex and side with ST. I had this row with a colleague of mine who went down the "what a waste" line.

As ST says, he won two league titles, a European cup and a European Footballer Of The Year.

We could list the great British players who would kill for those honours. Greaves. Shearer. Brooking. Wright. Lineker. Hoddle. Beckham. Lampard. Pearce.

I could go on all night.

Sorry, but I don't agree with this "wasted talent" line at all....

If someone had told me at age 15 that I'd end up being one of the worlds all time most gifted footballers, earn a living playing the game I loved at the highest level, and also meet countless beautiful women, have a son who would be at my bedside when ill and generally enjoy my life to the full, to age 59 (10 years older than my dad when he died) I think I'd have taken it, on the whole....

And Besties own quote there is a good enough arguement to make me wrong.

(Still, dying at 59...it's far too young for someone of his talent to go - so I still maintain that it's a waste!)

A spot of diplomacy required here, I sense.

Looking back on my original comment, I'll agree that it's a bit strongly worded. I must have been pissed off at the time - and not just by the incessant volume of gushing hyperbole.

Swiss Toni, you're right to pick me up for being judgemental. But, regardless of whether Best's alcoholism was willful or not (ie whether it constitutes a disease), the fact remains that - as much as he achieved - he didn't achieve his fullest potential ("waste" is, I agree, too strong a word).

I for one would kill to be blessed with that kind of footballing talent, so it's inevitable that I'm inclined to feel that way, I think.

On a tangential note: whatever happened to your 'My Favourite Player' series? I was really enjoying that. I'm sure there'd be plenty of people up for doing it, and it gives us the opportunity to debate the merits of different players. Might Lord B not kick it off again with a piece on Best?

Readers of "All quiet in the East Stand" will already know of this, but over there there is a link to video download of George Bests, best bits...