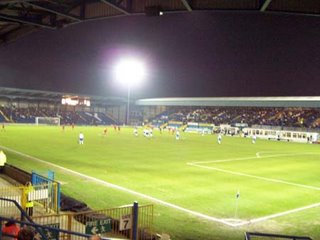 The great Becks debate is here.

In 2002, Bury FC were days away from going under. The club offered, for a donation of at least £10 to put donors names on the seats of their Gigg Lane ground. Enough money was raised to save the club, and, after a torrid few years, the smallest club in the League are back on an even keel.

I used to live in the town, and so I have a fond affiliation with the club that started or kick-started the careers of Dean Kiely, David Johnson, Paddy Kenny and David Nugent, amongst many others. Neil Warnock took the club to the heady heights of the First Division in the early 1990s, although recently they have been floundering in the bottom half of League Two.

Anyway, there is an excellent article here about Bury and, specifically, the FA's harsh decision to expel them from this season's FA Cup which cost them a financially lucrative tie with Championship side Ipswich Town.

My stag weekend included their home game with Luton Town in 2000. I saw them lose to Bournemouth in the play-offs in 2003 (a game which Jeff Winter refereed and spent the half hour before kick-off signing autographs with the fans. I have never liked the permatanned idiot since). I have seen Manchester United beat them in a friendly to help raise money (it was a sell-out).

They are a great little club with a very promising young manager and always the second result I look for at ten to five on a Saturday afternoon. They certainly didn't deserve the punishment meted out by the FA, that's for sure.

And someone please buy David Nugent from Preston as Bury have a 20% sell-on clause! That'll keep them going for *months*....

(thanks also to Skif for the photo of Gigg Lane. Bizarrely, I did a Google image search and his photo came up! Thanks mate!)
Posted by LB at 9:57 am