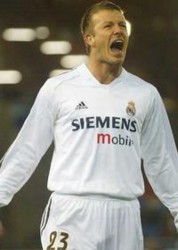 So that's it then. A 31 year old English footballer has decided to more or less end his serious football career by moving to LA Galaxy to play MLS. Apparently it's a move that is motivated by the challenge and not by the money.... although the deal is worth £128m over 5 years, which works out at something like £3000 per hour.

It's hard not to be cynical about Beckham as a person. He seems to be so in love with his own celebrity that it's difficult not to think that this move is motivated by Hollywood, by some kind of warped notion that somehow he belongs in Beverley Hills and should have a gated mansion next to his good friend Tom Cruise.

But what does this move say about Beckham the footballer? He may never have been a truly great player, but he was certainly the best English footballer for a number of years, and I have never seen one player put in such a remarkable performance as he did for England at Old Trafford against Greece in 2001. Doesn't this move signal a total lack of ambition? A lack of passion for the game? He's only 31 years old and he hasn't won anything significant for nearly 5 years. His move to Real Madrid may have played to his ego by allowing him to play in the same team as Zidane, Figo, Ronaldo and the other Galacticos, but surely he has unfulfilled ambitions? Does he not want to prove Steve McClaren wrong and force his way back into the England squad? Does he not want to demonstrate his worth as a player? To rage against the dying of the light as the shining light in a smaller team that punches far above its weight?

No. Apparently he turned down many offers to play in Italy and in England and elsewhere across Europe, but it was never going to happen was it? To a player as status and image conscious as Beckham, the only way to go from Real Madrid was down, so he's opted out of the slow decline and has just removed himself from the equation entirely by going somewhere that he is going to be the unquestioned star of the show, but somewhere the football is only going to be a minor distraction. He was never going to be turning out for Bolton and putting crosses in for Kevin Davies was he?

I wish him all the best with his latest move, of course. It will be interesting to see if he reverts back to his favoured number 7 shirt - the shirt that he used to covet because of what it represented as a Manchester United player, to follow in the footsteps of players like Eric Cantona and Bryan Robson - or if he elects to continue with the number 23 that he wore in Madrid. I would argue that if he chooses 7, then he's gone for the football. If he chooses 23 - a number more famous in the USA than anywhere else in the world - then he has gone for the celebrity and for the money.

So long and thanks for all the fish, Becks.

Check out this very interesting article seeking to debunk how much DB's contract is actually worth....
Posted by swisslet at 8:28 am

Funny, I heard that he's gone for number 7.

Good luck to him - I think he'll do much for 'soccer' in the States, maybe raise the level of the game, encourage more interest and investment.

I reckon if he'd signed up for say Bolton, Steve McClaren still wouldn't have picked him for the England Squad. I mean he was good enough to be England captain in the last world cup yet not good enough to figure in McClaren's plans, even short term.

As for Posh - well, she was always destined to be a Desperate Hollywood wife!

Hi, I am selling a sexy David Beckham painting painted by me.
nicefy.com

GO TO THE BELOW LINK TO ENJOY THE FULL MATCH

GO TO THE BELOW LINK TO ENJOY THE FULL MATCH