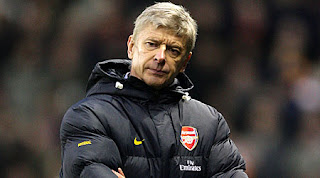 It usually doesn't do to scrutinise my pre-season predictions too closely.... and barely two weeks into the season, I'm already wondering whether Yossi Benayoun really is going to be the fulcrum at Chelsea..... but I did say this about Arsenal:

"I can't see him being sacked, but what are the odds on Wenger walking out at some point this year?"

Now, we all know that the media like a good crisis, and they've certainly been doing their best to put the pressure Wenger on after a poor start that has seen Arsenal gather a single point and no goals from two games.

Every bar room expert knows that Wenger needed to sign a strong goalkeeper, a dominant centrehalf, a midfield ballwinner in the mould of Patrick Viera and a goalscorer to play up front with the ever-injury-prone Robin van Persie.  What do they get? A 19 year old defender,  a 17 year old winger and an apparently very volatile Ivorian striker.  How typically Wenger those signings are.  Worse yet is the loss of skipper and heartbeat of the side, Cesc Fabregas, to Barcelona and the likely departure of Samir Nasri to a rival Premier League team.

You hardly need to be an expert to sense the upheaval going on at the Emirates, and it hasn't taken the press long to gleefully get their classic "club in crisis" headlines out.

It's early days though, isn't it?  Even though the Fabregas and Nasri have been expected to leave for some time, most of those same critics reporting on the turmoil in North London were still predicting that Arsenal would finish in the top 4 in the Premier League.  Yes, they do probably need to make some signings in the next couple of weeks before the transfer window closes, but there is still time and, although it's not really Wenger's style to splash the cash around near deadline day, who's to say that a couple of well-judged signings might make all the difference to Arsenal's season?

Arsenal's next few games are critical: the second-leg of the Champions League qualifier with Udinese, then a trip to Old Trafford in the league for a Super Sunday fixture on 28th August....then a home game against Swansea before bogey side Bolton at the Emirates and then Spurs away on 2nd October.

Is it too soon to say that Arsenal's season could effectively be over by October?

It's a cliche AND a statement of the obvious, but these really are a make or break few weeks for Arsenal.  I doubt they'll ever sack him, but maybe, just maybe, Wenger will decide that enough is enough before the leaves have come off the trees.

Interesting times.
Posted by swisslet at 11:50 am