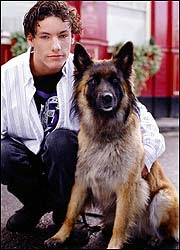 After his nine years with Robbie Jackson and subsequent five years with Sonia, Bianca, Mickey, Vinnie and Gus, I'm sure that many of you, like me, were wondering what became of Eastenders' most famous dog (other than Ethel's little Willie, obviously).

Rumours abound that Bianca killed Wellard by feeding him chocolate, before scattering his ashes on the allotment. However, when I was reading the match report of AFC Wimbledon's Carling Cup match with Crawley Town this week, I was delighted to note that the loveable mutt has found a new home at Kingsmeadow.

He put in quite a shift as Wimbledon's number 8, apparently, before being substituted with 13 minutes to go...

If she did it. It is a pity that there isn't a way to punish her because her crimes.