We, at Cheer Up Alan Shearer, hate Barry Davies. 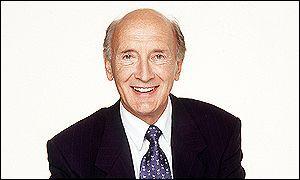 Now, you may wonder how we can say such a thing. He's 73 years old, for heaven's sake. It's like saying you hate someone's grandad. (Well, he probably is someone's grandad so it's, er, exactly the same as saying that.)

Thankfully, he has retired from football commentary. Although the same cannot be said for all the other sports which suffer from Barry’s patronising musings. We have heard him commentate on gymnastics, on ice-dancing, on obscure Olympic events. For Lord's sake, we thought we'd finally got rid of him until he turned up at Wimbledon this year.

The BBC applaud his wide ranging skill and general sporting knowledge. We say “jack of all trades, master of none”.

When was the last time you heard Motty commentating on pursuit cycling? Or badminton? Quite right. Never. Motty is a proper 'one sport' commentator.

The problem with Barry Davies is that he applies his (and we use the word very loosely) “style” to everything he does. As we see it, this style involves:

1. Setting the scene by using language that makes it sound like you’re watching a 1950s police drama.

2. Patronising every mistake, foul or infringement by using words like “quite unnecessary”.

3. Spending five minutes saying nothing because you think the viewer respects you for doing that (when actually what they want is commentary which is what you are being paid for).

4. After the five minutes of silence, making a noise that sounds like you’ve just been walloped in the gonads.

It’s the noise that angers us the most. Yelling “oooooooooooooooooooooof” when something of importance happens. Making a career out of the noises Paul Whitehouse makes as the “suits you” character is frankly preposterous.

Anyway, this somewhat irrational hatred of the doddery old duffer did, six years ago, lead to a brand new football related comedy feature called “Mr And Mrs Barry Davies” telling the ordinary day to day tales of an ordinary sports commentator. It wasn't any good in 2005, and it's certainly not any good now. Is that going to stop us bringing it back? Oh no.

[Barry and Maureen Davies walk into the Chinese restaurant. They are seated by the waiter.]

Barry: “Welcome to the Woo Sang. It’s a balmy night in Romford as you join me for this Chinese meal. It’s the sixteenth time we’ve met in this restaurant and so far it’s nine-six to me in terms of who has paid the bill. The restaurant has been decked out for the occasion in the colours of the Dong-Hang-Ming dynasty dating back to several thousand years ago.”

Maureen: “What are you having for a starter, love? I’m having the Sesame Prawn Toast.”

Barry: “Oh, that’s dreadful. A dreadful mistake, and I wouldnt be surprised if that costs you the whole meal. Terrible. What were you thinking? I can’t believe you didn’t even consult the assistant for a second opinion before making that decision. Frankly that could alter the whole outcome.”

Maureen: “And them I’m having the Sweet and Sour Chicken”.

(Admittedly, this feature may not run to a whole series. That won’t stop us trying, though.)
Posted by LB at 8:12 pm