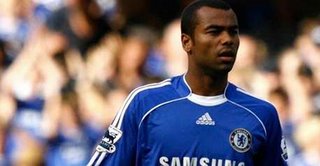 Who the hell is Ashley Cole trying to fool? Himself?

"The club made Thierry feel wanted and special, wooing him, wining and dining him, speaking in public about how much they want him to stay, going on a deliberate charm offensive," he said. "But me? I didn't have one dinner, one meeting or one phone call from anyone. That's not sour grapes, it's just a sad truth. The truth is that the Gunners had done nothing all season to hold on to me.

"My worst fears were confirmed when, as Thierry and I sat in the centre circle after the final whistle, his name was sung from the rooftops while my contribution was recognised by a deafening silence. As his chants faded away we waited for mine. And we waited. And there was nothing. 'They're not bothered about me', I said, resigned to the fact. It was like I was the invisible man."

Hold on: who the hell is this Thierry Henry guy? Surely not Arsenal's record goalscorer, the man who has scored 215 goals in 239 appearances? Why on earth might he be considered more valuable than some short-arsed left-back who missed almost all of last season and then played every game for England in the World Cup?

Every time I hear Ashley Cole whingeing about how poorly treated he was by Arsenal, it's everything I can do to stop myself vomiting. Poor Ashley was promised £60,000 per week by the Arsenal board, who then reneged and offered him a measley £55,000 per week. It's not about the money, you understand, it's about the principle. They never wanted to keep him. They questioned his commitment to the club.

Really? How dare they? Surely you are not the same Ashley Cole who was caught tarting himself out to Chelsea in June 2005? The same Ashley Cole who has shown absolutely no respect for his contract with Arsenal and has actively sought a transfer? Why on earth would they dare to question his commitment to the cause after that?

And does he really, truly believe that he will be well received by the Arsenal fans when he makes his first trip to the Emirates Stadium with Chelsea? Does he really think he has been the blameless victim in all of this?

He makes me sick.

No one comes out smelling of roses after this whole sordid affair. Not Arsenal (who are paying Gallas more than they refused to pay Cole), not Chelsea and certainly not Ashley Cole himself.

This whole sorry saga represents everything that is bad about football.

Oh hang on, perhaps it's just symptomatic of a sick game.
Posted by swisslet at 8:53 pm

But don't you get it, he moved to Chelsea in order to 'win things'. Really, it wasn't about money. Never was. Can you imagine, really, come on now...

will he also be moving his nationality to Brazil, y'know, to "win things"?

Wayne Bridge is probably hoping so.

Try today's instalment of Cole in Wonderland for a good laugh. He's claiming that Mourinho and Kenyon just so happened to walk in on a meeting with his agents, he saw nothing wrong in having a 20 minute chinwag with them, and that when Mourinho told him he wanted a left back and that Cole was the best left back in the world, that "never strayed anywhere near what could be considered an approach by Chelsea." Nurse!

Basically when Henry's contract was running out he was honest and open and told everyone that would make his decision after the Champions League final. I honestly thought he would leave and wouldn't have held it against him as you can see the passion he has for the club and what he has contributed. In the end he knew that it was Wenger and Arsenal that had made him the greatest footballer in the world, and that was the pleace for him.

Where as Cole showed no gratitude for the guidance Wenger has given him, and so he sneaked around having secret meetings etc.

Is Chelsea really the club to make him a better player? Yes he may win things but I don't think he'll develop further than where he is now. He'll rest on his laurels, after all he has all the money he needs, has the popstar girlfriend, and will undoubtedly win things there, so why try harder??

I read(*) in a draft of the Cole biog that he was born to Brazilian parents, but adopted by an English family. Isn't that just typical of our Ash's bad footballing luck!

(*) Would never sully myself by buying a copy of the book. Sure, I'd steal from my grandmother, I'd invest ethically 'couldn't give a ****' companies, but you've got to draw the line somewhere. I'd never buy the Cole book.