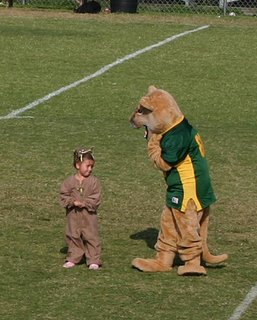 This makes for interesting reading. Apparently, a majority of Premiership clubs (already presumably as rich as they have ever been) charge kids who want to be their mascot on a matchday.

The worst club appears to be Fulham who charge between £300 and a whopping £995 depending on the opposition.

Spurs have eleven mascots for each home game - one for each player - and these pay between £95 and £295 each depending on the opposition.

Portsmouth charge £300 and Bolton £400 although apparently they do offer some free places during the season. Bless.

Unsurprisingly, Chelsea charge £176.50. Although I imagine that's actually cheaper than buying a kid a ticket for the match.

The clubs justify this cost on the basis that the mascot scheme normally includes a package (replica shirt etc) but why not let's big up the teams that don't charge - step forward:

Another example of greedy football clubs chasing every last penny...
Posted by LB at 11:57 pm