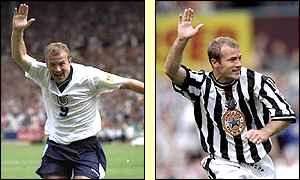 It was about quarter past midnight on Saturday night/Sunday morning and we were stranded on Long Acre near Covent Garden. The West End of London was buzzing with Saturday evening revellers and having just finished a fantastic meal at Belgo, the four of us were searching in vain for a black cab to take us back to her hotel.

In the distance, Swiss Toni spotted the faint orange light of a London taxi. On the pavement in front of us were another group with a girl who spotted the same cab at almost exactly the same time.

Majestically, like Alan Shearer in his pomp, Swiss's walk developed into a jog and he headed in the direction of the taxi, right arm aloft as if the net at the Gallowgate End had just rippled with another Shearer goal. Practically elbowing the girl aside (another trait made famous by Shearer on Tyneside) he galloped in the style of that legendary number 9 until the taxi pulled over. To groans from the disappointed girl we piled into the back of the cab and headed for the hotel.

See? Two years of an Alan Shearer monikered website *did* turn out to have it's uses. I tell you, the man himself would have been so proud....
Posted by LB at 10:25 pm

hey - she had no greater claims to that cab than me. I just moved faster. Her groan was the groan of the outmanoeuvred, not the justified complaint of someone whose place had been unfairly usurped.....!

Oh yes, I'd echo ST's sentiment. It wasn't that there was any foul involved, it was more that the girl was an average Premiership centre half being pulled out of position and then punished for her lack of strength and poor positioning.

'...it was more that the girl was an average Premiership centre half...'

Covent Garden, a groaner, outmanoeuvred - heh, watch it - I almost married that girl.