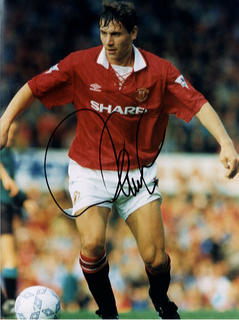 I could have made a case for any number of players here, I really could. Where to begin? For a start, there are a couple of non-United players I considered. Until his horrific motorbike accident, I always thought that Matt Jansen was destined to become an England fixture. He came within a couple of players of making the World Cup squad in 2002 and was a great little player. Indeed he came close to signing for United when he left Carlisle, and instead went to Palace and then on to Blackburn. Two footed little genius.

And then (as discussed here previously), the big-honked South Coast legend Matthew Le Tissier. Goals for which there are insufficient superlatives.

Anyway. The United list of players I considered was much longer. And not necessarily for talent alone, to be honest - but that's why we have favourite players, eh?!!! George Best, probably the most skilful player ever? Bryan Robson. Neil Webb. Denis Irwin. Mark Hughes. Ole Gunnar Solksjaer. Gary Pallister. Ruud van Nistelrooy.

The third choice was Lee Sharpe. I always loved Sharpey in a way I never did for Giggs. He was less mazy and more direct, but I always felt more effective. Imagine if his wages hadn't disappeared down his throat and up his nose how many England caps he'd have won...

My close runner-up was, in my opinion, the pound-for-pound best signing in the history of English football, and a man who was the catalyst for all that we won in the 1990's. Unlike most United fans I am not referring to the arrogant Frenchman, but the red-hootered giant who joined United just after my all time favourite player. Signed for £550,000 in August 1991, Peter Schmeichel was the man who made it all possible. Countless saves, four goals (!) and simply never satisfactorily replaced.

And so we come to the little Russian legend. He arrived from Shakhtar Donetsk in 1991 and made his debut against Crystal Palace in May 1991 and was a fixture on the right wing of United's rigorous 4-4-2 formation for four years.

How to describe him? He was a little fella, but a more direct midfield player you would struggle to find. Full of energy and trickery, he was an old-fashioned winger in the truest sense of the word. Not only did he provide service for Brian McClair and Mark Hughes as the Championship came back to Old Trafford for the first time in over two decades, he was a formidable finisher himself - 36 goals in 158 United matches is a not bad return for a midfielder.

He won two Premiership titles in 1993 and 1994 as well as the FA Cup in 1994. One of my favourite memories of Kanchelskis was the goal he scored against Oldham Athletic in the semi final replay that year when he picked up the ball on the right wing and went on a mazy dribble across the pitch beating several men before angling an unstoppable left-footed drive from the left hand corner of the penalty area.

He also played in the side that came within a game of winning the first ever domestic Treble (League, FA Cup, League Cup) and was famously red carded in the League Cup final of 1994 when an Andy Townsend inspired Aston Villa beat United 3-1 at Wembley - Kanchelskis sent off that day for deliberately handling on the goal-line. 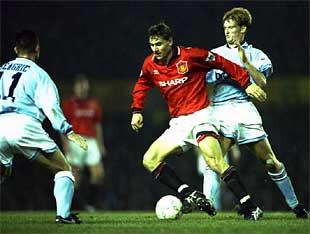 But this was the highlight of Andrei's United career and a night that will live long in the memory of United fans. Still smarting from their 5-1 defeat in the Manchester derby in September 1989 at Maine Road, United arrived at Old Trafford on November 10th 2004 to face the old enemy in the Premier League. In the derby games in between there had been five draws and United had won by an odd goal in three of the others.

But aKanchelskiss inspired United tore City apart that night. After an opening Eric Cantona goal, Kanchelskis hit two either side of half time. Mark Hughes added a fourth and with two minutes to go theRussiann broke free on the right wing and slotted United's fifth, completing the first hat-trick in a Manchester derby since Francis Lee in 1970. Was that the best ever United side that night? Schmeichel, Keane, Irwin, Bruce, Pallister, Kanchelskis, Ince, McClair, Hughes, Giggs, Cantona.

And then in 1995 (along with Paul Ince and Mark Hughes), Sir Alex sold Kanchelskis to Everton for Â£8million, amid rumours that he had accumulated substantial gambling debts at a series of Manchester casinos. And from there his career gradually deteriorated. He shone on occasion for the Toffees, and then a reasonable stint at Fiorentina before spells at Rangers, Manchester City, Southampton and in Qatar. He is still playing as a 36 year old today, for the Russian Premier League side FC Saturn based in the Moscow suburb of Ramenskoe. And of course he was replaced on the right hand side of United's midfield by that preening idiotic clothes horse from Leytenstone which means for most United fans he is lost in that comparison.

Wikipedia defines Kanchelskis as a "dynamic goal scoring winger with great pace" which sounds like a reasonable assessment to me. What a little player he was.

Though he played for "that lot", I also kinda liked Kanchelskis, he sure knew how to be a winger, eh?

I may have mentioned it before but I think I may have seen his first ever game for United. A pre-season visit to that footballing mecca; VS Rugby. United lost 1-0 (much to my mirth) they also went on to NOT win the title that year.

Now who won that?
(I can't help it, it's the only thing we've ever bloody won while I've been watching!)

Personally, I could never believe Fergie let him go. What a genius.

I think Kanchelskis is the best winger Manchester United ever had in last 20 years. Gigg and Ronaldo are the best at their wing but Kanchelskis is simply the better one in both wing.