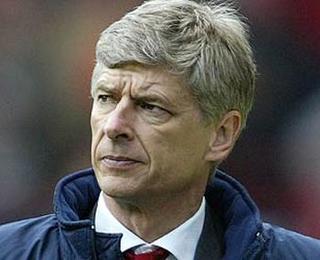 This man thinks that Premiership clubs have an obligation to entertain the fans.

"It is because he wants to enjoy a football game. I feel we all have a responsibility to keep that going."

Chelsea boss Jose Mourinho has a completely different opinion. "Obligation is not a word in my footballing vocabulary," he stated. "In my vocabulary the words are: work, be professional, do your best, work with quality, commitment and enthusiasm and respect. That is what I promise.
I cannot promise I am going to win but with all those ingredients normally you succeed."

So who is right?

I can see Mourinho's point of view, and in a very narrow sense, he is quite correct. His job security, salary and reputation is built on results. Numbers of three points, cups and titles. The history books will show Chelsea winning the Premiership last season and, no doubt, further trophies over forthcoming years. They won't show hundreds of goals for and against and a second place finish.

Arsene Wenger has developed an Arsenal team brimming with positivity and attacking intent. They are a team of good ball players with pace, control and interchangeability designed to attack the opposition and score goals. Compare their flair in the final third of Henry, Bergkamp, Reyes, Ljungberg, Pires and Hleb to the more pragmatic Chelsea team including Drogba, Gudjohnsen, Essien, Lampard and Robben.

I don't think Chelsea are as boring or defensive as they are painted. Any team with Crespo, Cole, Wright-Phillips, Robben and Duff can't fail to provide attacking flair on occasion.

I can certainly think of two supposedly "big clubs" who are much more boring and negative in approach.

Rafa Benitez' Liverpool side are still evolving, and they remain in a period where they are securing their defence to make themselves difficult to beat before they fully concentrate on their attacking intent. Their tendency to play three central midfielders (Alonso, Sissoko, Gerrard) alongside, say Zenden and Luis Garcia with one striker has made them tougher to beat, but struggling for goals (one Premiership goal this season, and that from a free kick).

And then we have the worst culprits of all for negativity; a team who have had five shots on target in the last 270 minutes of football and who, it is reported today, are so upset with the management team's negative tactics that they have approached the reserve team manager to speak to the boss on their behalf about the situation.

Yes, my very own beloved Manchester United, for a decade the embodiment of attacking, exciting football have developed a hugely negative 4-5-1 formation designed to let very little through (which is working) but has resulted in less and less goals. Leaving one of Europe's best strikers ploughing a lone furrow, whilst shunting two of the world's best young players out wide is frustrating not only the fans, but the player as well.

For what it's worth, I agree with Arsene Wenger. Chelsea can win boringly all they like, but what Mourinho fails to take into account is the effect this approach has on the wider game as a whole. There were 62,000 unsold tickets for this weekends Premiership games. I'm not sure that is borne entirely of the cost of tickets or the predictability of the results, but more that paying £25 or more for a 0-0 draw isn't anyone's idea of value. Go to the cricket and get a day's play for £40. Take the kids to the zoo. Have a Leo Sayer with your mates in the town centre.

Of course I am not saying that football is dead, but if the likes of Mourinho and Ferguson continue with this defiance, more and more people will lose interest and that's not good for the game as a whole. So (and here's something I have never said before), hear hear to Arsene Wenger.

Related to this, an interesting question is: if you're a mediocre top flight team (Villa, M'brough, etc), coming up against an in-form Chelsea or Man United, what's the best approach to take something from the game. Attack attack attack, or something 'a little bit more European'?

there are millions of Arsenal/Chelsea/Man Utd fans who will not give two hoots what quality of football they play if they win every game. They will still buy shirts and duvet covers and the like. In fact, may I be so bold as to refer the honourable Lord B. to his own comments about not caring a jot if England scraped every game 1-0 in the dullest manner possible if it meant that they won the World Cup?

It is an entertainment industy, but they are ultimately judged on results. Holland were the best side in the world in 1974 and again in 1978, and both times were beaten. They are remembered for Total Football, of course they are, but they are also remembered for not winning anything.

I don't like it, but I don't imagine it will change.

(and by the way, M. Wenger, I have seen many crap games featuring Arsenal over the last 10 years).

on a related note (and linked to what El Tel says), what do you make of the trend amongst middling premiership sides to apparently accept a beating against the top teams, and to rest their players for games they believe they can win? (someone did it against chelsea earlier this year, although I can't remember off the top of my head who it was). That's an insidious trend if ever there was one. As fans, do we applaud this pragmatism if it means we can consolidate in, say, a UEFA cup slot, or do we curse it for wrecking our dreams of shock results?

ST: I think it was West Brom who rested players v Chelsea. Or was it the Mackems?

El Tel: To be honest, we're not playing well anyway, so if we were up against Chelsea or Man Utd I'd be happy for us to stifle them and get a point. It frustrates me that we often play with seemingly little attacking intent against very average teams too, though.

I think it's all bollocks, every team should try to win every game, irrespective of the opposition.
That's the whole point of the sport.

He's right. Teams like Bolton and Newcastle need to open up little bit.