The answer came pretty quickly & could be seen as quite controversial (to Alex, & Yorkshire at least!), because my favourite player never played in the Garibaldi - he played in Green & White Hoops.

My favourite player is The Magnificent 7, The King of Kings, Henrik Larsson. 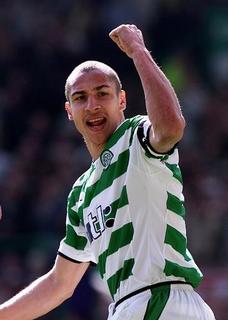 Don't get me wrong I have adored many Forest players over the years I've watched them, Webb, Roy, Bart-Williams, & Harewood just a few of my Favourite players, but Henrik was something else.

He arrived @ Paradise in 1997 for the princely sum of £750k & made his debut for the Bhoys in televised game against Hibs, which saw the Hibees win 2-1, over the season he established himself in the side & the goals started to come, helping Celtic stop Rangers win 10 in a row. Over the next couple of season he became Celtic's main goal threat, he then unfortunately broke his leg(rather nastily) in a European game in Lyon & was sidelined for the remainder of the 99/00 season, Rangers cruised to the title.

But there was to be a power-shift in Scottish football in the 00/01 season, with the arrival of Martin O'Neill (who I'd truly hoped would have got the Forest job instead of Pratt).
Larsson had recovered & had trained all summer, but no-one knew whether he would still be as good. They shouldn't have worried, Henrik came back better than ever.

O'Neill had instilled belief in the side, & Henrik simply destroyed all-comers on the pitch, personal highlights for me: his hat-trick in the first old firm clash of the season which Celtic won 6-2, his headers in the snow against Hearts, rounding the Kilmarnock keeper in the Scottish league cup final like it was the easiest thing in the world, & the one goal that I'll never forget, at Ibrox with Celtic already Champions, & 2-0 up thanks to Lubo "The Magician" Moravcik, Henrik scored from an impossible angle, his 50th goal of the season. I shouted the house down!. Celtic won the Treble & Henrik ended up scoring an incredible 53 goals that season.

The majority of the media & my mates would continually slate the Scottish League, & make claims that he wasn't that good because he didn't play in the Premier league, Henrik simply made a mockery of them all with his goal scoring exploits for Sweden & in Europe with Celtic. In the post match interview at Ewood Park(after Celtic knocked them out of the UEFA Cup)live on BBC Henrik said they did it to prove to the English press that they weren't shit. They proved it further by proceeding to knock out Liverpool & make the final where(in a truly heart-breaking football week for myself) they lost 3-2 to Mourinho's Porto in extra time. Henrik was the star again though, his two goals (both levelling the score at the time) further cementing his legendary status.

What I loved about Henrik was his ability to score from nothing, he always seemed to know where the back of the net was. For a short player he scored countless headers, on the ground he could turn defenders inside out & leave keepers dumbstruck, & although he'd be mercilessly hacked down every game he'd always get up without complaining & just get on with it. The sticking out of the Tongue celebration hilarious & whether he was sporting braids or a skinhead, it didn't matter who the opposition were Henrik would always score. That's why I have "Legend" 7 on the back of my Celtic top, & that's why Henrik Larsson is my Favourite Player Ever, "You are my Larsson, my Henrik Larsson.....

Thanks to Dom for that.

I'm going to do next weeks one - it's time we picked someone other than a striker I think....!

well, you say non-partisan, but it's fairly clear the man follows Celtic as well as the trees, isn't it?

Great post though, and a great player. People often talk about how rubbish scottish football is, and point to the fact that mediocre premiership players like Rod Wallace can turn up and bang the goals in. By my reckoning, 50 goals in a season is not bad going. Three times better than Rod Wallace? At least.... By the looks of it, the scottish premier league is going to be a good deal more competitive than the English Premiership.

Less showy than strikers, but if you're looking for passion, you can't go wrong with a good fist-pumping defender (nicely ruling out Rio Ferdinand)

John De Wolf - what a player. I can imagine him being part of an XI That Evolution Forgot, partnering Brian 'Killer' Kilcline in central defence. Just wondering who else would make the team... Any suggestions?

I beg to differ. There's not many mediocre strikers that have a league title medal to thier name.

On the same note, Chris "Huggy bear" Whyte would surely be in with a shout on in the side that evolution forgot, eh?

mediocre strikers with a championship medal to their name? Hmmmm. Didier Drogba?

My nomination for the side that evolution forgot: Martin Keown.

mediocre strikers with a League Title to their name. Righ then, folks, I bet there are more than you think.

and my nomination for the team that Evolution forgot:

Me & you could fall out, y'know mate!

So, for the XI That Evolution Forgot we have de Wolf, Kilcline, Whyte, Keown and Dowie. Four centre backs and a striker. A little bit unbalanced at present...

Anyone else think Dowie actually looks (relatively speaking) easier on the eye and less like the Elephant Man now than he did when playing?

Ben - I agree about Dowie (although it's all relative, eh?), and cordially nominate Peter Beardsley, and to add a little balance to the side, Peter Reid, and perhaps Diego Simeone?

Spot on Swiss - I do follow the hoops as well - have done since '88 only 2 years less than I've followed Forest.
But Forest are my first & true love football wise I just wanted to make that clear!

Terry Hurlock - there's another midfielder for the XI That Evolution Forgot.

Ronnie Whelan, do I need to say more...