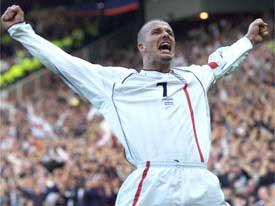 David Beckham is a preening clown.

He is a naricssistic buffoon with an unhealthy obsession with his own celebrity. He has a poisonous, talentless wife (who I was unsurprised to learn is apparently on a "lobster & champagne diet". Why she's on a diet at all is beyond me, but somehow I didn't see her being on the cabbage plan...). He will endorse any old tat for cash and will offer his opinion on anything (I saw him quoted on the Ashes today, and he didn't let his total lack of interest in the cricket get in the way of finding something to say about it).

Yes, yes. This much we know.

What about his worth as a footballer?

He's never been the quickest player, and he's never really been one to set off on a mazy dribble. He's certainly not very likely to ghost past a marker as though he wasn't there. He's not a great header of the ball,and he's not the best tackler.... what he does have though is the ability to pass the ball as though it has been laser guided and an ability with the dead ball that is almost second to none. From his station on the right-flank, Beckham at his best was able to feed a stream of quality ball to his forwards, to put ball after ball into the penalty area with enough whip on it to make it a defender's nightmare. On top of this ability, he had amazing stamina. I have never seen a single player work as hard as Beckham did against Greece in the final qualification game before the 2002 World Cup. Even before his free kick, it was as if he was taking on the whole Greek side single-handedly. It was an astonishing performance, and the single biggest reason that England qualified.

Sadly, Beckham was below his best for the tournament itself, a result of his infamous foot injury. At some point in the aftermath of that tournament though, Beckham got ideas above his station. He was transferred to Real Madrid, the biggest club side in the world, and somehow he began to believe all of his own publicity. He began to hanker after a berth in the centre of midfield; closer to the heart of the action; a position more fitting to his status as the captain of England. He stopped doing the things he was good at. To watch him playing for England was to see him constantly drifting into the centre from his position on the right. This Saturday we saw him playing in the deep-lying midfield player in a 4-5-1 formation - he played OK, but surely this was a case of Eriksson finding a formation that enabled him to keep Beckham in the side, rather than putting him in his best position or of putting the best available person into that position. With all due respect to Wales, against tougher opposition, surely he would be found out in that position? The image of Beckham jumping out of a tackle in the 2002 World Cup and Rivaldo heading off down the pitch to score is too fresh in my mind. If Sean Wright-Phillips is a better bet on the right side of the midfield, then surely Beckham must be dropped, captain or not.

Forget about his commercial interests for a minute. Thinking purely about his football, do you think he's worth his place? Should he be captain? Where would you play him?

You've read my barely concealed plagiarism of the thoughts of many of England's sportswriters.... now tell me what you think.
Posted by swisslet at 7:52 pm

Hmmm.
I think you're points are pretty spot on, but it's such a difficult question.
I'd maybe like to see him dropped for a game or 2, just so he knows it can happen. Gee him up a bit.
Make him remember why he became who he is.

That said, what happens if the side doesn't miss him?
And in a big, big game I'd rather have his experience there.

It is worthy of pondering though, eh?

perhaps if he learnt how to take a decent penalty. How can a dead ball specialist be so bad at them?

The lazy journalists and pundits all attributed United's third place finish the year after Beckham's departure to the absence of the midfield clogger.

There were lots of other reasons (the inability of Juan Veron to acclimatise to the English game amongst others) but the departure of Beckham was not one.

I have never been a huge fan. The reason he was never going to be a world class player at United was because he was never the Main Man there. We had Keane. and Giggs. and Gary Neville. So when he went on England duty he suddently became the centre of attention.

And, lest we forget, United pocketed £13m and Cristiano Ronaldo (like him or loathe him, he'll end up a better player than Beckham) when we sold him to Real Madrid.

I think he has a part to play for England, I really do. Not as a penalty taker, though (penalty taking doesn't need a dead ball specialist, it needs someone with the mental capability to deal with it) and not necessarily as the captain either (Terry, Lampard or Gerrard are better choices I reckon).

Stick him in the centre of midfield with Lampard or Gerrard. Shove Wright-Phillips on the right wing, a left footer on the left wing and play Rooney and Owen up front. The way Rooney plays we'll always have enough in midfield and it means we get pace in the side as well as Beckham's dead ball delivery and passing range.

There is also the argument that if you are sitting in the opposition dressing room, and you get the England teamsheet without Beckham's name on it, you get an instant lift before the game kicks off.

Problem is, it becomes an exercise in individual and team confidence-maintenance if Beckham as captain changes, ditto Beckham's place in the starting line-up...

Where to play him... right now, an England 'problem' lies across midfield. I'd be happy to see Steve Gerrard in the middle, with Wayne Rooney playing off the front man/men. Stick with SW-P on the right, persevere with Joe Cole on the left. If it's England with one up front (not Rooney), then play Beckham in a floating midfield role (has to work with Gerrard). If it's England with two up front, then Beckham doesn't start. Lampard on the bench too.

Sven would take a lot of pressure off himself and one or two of the squad if he just fronted and said 'Player hasn't been on his game, I had a chat with him, so we're seeing how things work with Other Player'.

if I had to pick 2 from Lampard, Gerrard and Beckham.... I know who I'd leave out.

and as for Peter Crouch... well Lord B, you're putting a whole new and unexpected spin on the phrase "he's got a good touch for a big man".

I find it hard to understand all the sniping that goes on around Beckham. Sure he's stupid, shallow and married to a vapid stick insect. He's also an inspirational footballer.

I was as impressed by Beckham against Greece as you, Swiss - and I couldn't believe that in the wake of that match John Barnes blamed him for England nearly failing to qualify because he was making the team lose their shape by coming infield all the time! He was only doing it because no-one else on the pitch was doing their job!

I'd be amazed if I'm alone in thinking that Beckham had a very good game on Saturday. OK so he didn't have much in the way of attacking midfielders to contain in his new defensive role, but his passing was out of this world, particularly to Shaun Wright-Phillips. And how Ashley Cole headed wide from that pinpoint cross I have no idea.

On current form, I'd play Beckham in the centre with Gerrard, SW-P and Joe Cole wide (Lampard has been surprisingly poor of late). If Owen and Rooney both start on Wednesday, though, I suspect it'll be either Cole or SW-P who gets the chop.

Your description, Swiss, of Becks playing against Greece is almost word for word the way I describe that performance. I've never seen an individual performance like it. He was astonishing.

I also think he's quite good in the air - he rarely loses a header, but perhaps we miss them because we're so used to him sticking the crosses in for someone else's barnet.

That performance against Greece justified Sven's (or should I say Peter Taylor's) decision to make him captain. I don't think he should be anymore, but I think we're stuck with it until he retires from international football.

John Terry has to be England captain. Whilst a bit of a thug off the pitch in his younger days, by all accounts, he rarely allows any bad decision or cheating striker ruffle him and just walks away in dignified fashion.

I'd keep Becks in the team on the right for now, but Wright-Phillips should come on for him if we need to inject some pace and flair into proceedings.

It's a shame SWP doesn't play on the left... although I'm sure he could...