Another choice in our guest post series..... A man who I was lucky enough to see a few months ago in a stand-up Q&A session in Nottingham. And I even got to ask him a question about how he kept so calm several seconds before the picture below..... 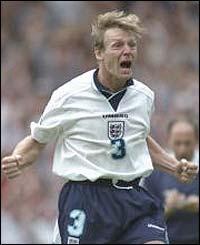 When Lord Bargain asked me to do this piece I thought long and hard about all the players I'd seen (some live, some only by virtue of that magical box in the corner of my Lounge). A magnificent list of players was conjured up all of whom could quite easily be classed up there as some of the greatest players in the game. Platini, Maradona, Lineker, Van Basten, Gullit etc. etc. but while these were all marvell ous players they weren't people I was able to see week in, week out so my choice had to be someone who wore the sacred Garibaldi.

In that list you could include Nigel Clough, Neil Webb (first incarnation not the one that came back from Man U) Roy Keane, Des Walker (even with his own goals we still love him), Pierre Van Hooijdonk (spit), Stan Collymore (judas, money grabbing b*****d). Now while Stan was undoubtedly a great talent the way he left the club left a sour taste and how could I class him as my favourite ever player after the way we treated him on his first return to the City Ground for Liverpool? I've never seen a player receive such abuse form the crowd, and it was from everyone not just the usual vocal element, people were running down the steps to get as close to the player as possible before screaming at him. Eventually the bloke had to be taken off because he just couldn't deal with the treatment he was getting. So no, while he was definitely a great player and had the ability to become one of the greatest strikers this game had seen I could never class him as my favourite player.

Really after thinking about it there could only be one answer, Psycho. Stuart Pearce was without doubt one of the greatest players ever to pull on the Red shirt, and in this day of players running to the biggest cheque book his loyalty to the Reds should be used as an example to the young pros coming through of how you should behave towards the club and fans that pay your wages. One of my favourite quotes of his was when asked if he could ever manage Derby he said, no, he'd rather go on the dole, he knew how Forest fans felt about Derby and he could never betray tham like that. 100% Pure Tricky.

The man wasn't blessed with supreme football ability but his commitment to the cause made him outshine the rest of the team. If Forest were trailing he'd somehow manage to get the whole team to raise their game (probably because they were worried about what he'd do to them if they didn't give everything just as he always did).

I used to watch Forest from the old Trent End, back in the days when it was still a terrace (still the only true way to watch a match) so I always had to get there before 2 o'clock to ensure I could take my place in the centre section behind the goal. So I was always there to watch the team warm up, something Psycho never came out to take part in. Our first glimpse of our great captain would be at 5 to 3 when he'd come running out the tunnel towards the Trent End to a huge roar and the Psycho salute, he'd respond in kind screwing up his face, punching the air and screaming at us. 5 minutes into the game and the opposition right winger would know what he was up against after a typically crunching tackle from Psycho (this was normally enough to keep most of them quiet for the rest of the match) which would be greeted by loud cheers form the crowd. If we were given a free kick within 30 yards or so of goal the crowd would once more call for there hero to step up and swing his mighty left foot at the ball (most people were clever enough not to get in the way of any of Psycho's freekicks although I do recall Earl Barrett for Oldham being knocked to the ground at Wembley after foolishly/bravely getting his head in the way of one).

He scored with one of these at Old Trafford not long after that penalty miss at Italia 90, the Mancs had been abusing him since the start of the game and when that goal went in the travelling Trickies went wild, Psycho just stood there arms in the air with a look on his face that said 'Well thats shut you f***ers up".

He made up for his Italia 90 miss 6 years later against Spain at Wembley in the European championships and his response was amazing, the way he was punching the air and screaming at the crowd made you proud that you were a Tricky.

Unfortunately after a brief spell as Caretaker manager at Forest he was to leave us and continue his career at Newcastle, West Ham and Man. City but the response he got from the fans on the few times he played against us was amazing including a standing ovation from the whole crowd on his return with City and in an away game at Newcastle he made a point at the end of the match of going over to the Forest fans and throwing his shirt in the crowd.

Now in management he still behaves exactly as he did when he was a player (except for the tackles of course) and it is obvious the game still means so much to him. Hopefully one day he can return to the City Ground but not until we're a decent side again, I'd hate to see him fail as manager after all the wonderful times he gave us.

So for one last time stand up, lean on the shoulders of the person in front of you stretching as far forward as you can and punch the air screaming .....

A man who has been interviewed for the Forest managers job twice, and overlooked on both occasions. Bearing in mind the job he is doing at City, that doesn't look like a great decision, does it?

Psycho's one of my most favourite ever players to play for another team and possibly one of the most terrifying ever!

One of my favourite stories about him is the one where he spent hours choosing his team line-up for a match and then showed to it to his wife and she pointed out that he'd forgotten the goalie.

THERE'S ONLY ONE STUART PEARCE!

Great choice. Obviously a bit past his heyday when he came to the Toon, but he still gave his all and that's why the fans took to him so quickly.

This is a bit cruel, but I also have a soft spot for him because he was caretaker manager at Forest (before joining us) for the game we won 5-0 at the end of the 1996/1997 season - Forest were already down, and that result got us into the Champions' League, which he then got to play in, having joined us that summer.

I like the fact that he always used to insist on blasting out the Sex Pistols in the dressing room before coming out onto the pitch - I wonder if he's got the City players listening to Never Mind The Bollocks before their games...

"I wonder if he's got the City players listening to Never Mind The Bollocks before their games..." This would be apt for the visit of Man Usa - considering the bollocks Fergie spouts.

Apparently there's no Sex Pistols in the City dressing room, he was asked this in an interview he did for Five Live the other week and he said that he leaves the music choice to the players.
Did see him at Rock City a couple of times when Stiff Little Fingers came to play.