Looking for the clip of Alan Shearer singing along in his car to "Elevation" by U2??

Then you're looking for this.

Filmed by one of his daughters on her mobile phone, apparently, and deemed so amusing that she just had to share it with the rest of the world on t'internet. 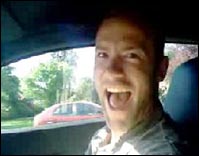 Genius or cunning post-retirement plan to reinvent his dour image? You decide.

With his punditry going great guns, and with his singing career getting off to such a great start, all big Al needs to do now is to invent something as brilliant as the thingummywig, and he'll definitely be well on his way to becoming the new Terry Venables.

Perhaps a Newcastle branch of the Scribes West nightclub could be in the offing?
Posted by swisslet at 12:27 pm

So what are you going to call this blog now he's cheered up?