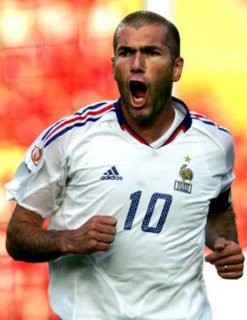 In the end, I think that the right teams have gone through to the final... but if France play like that on Sunday, then I can see Italy spoiling Zidane's swansong. France did enough tonight, but they did no more than that. They got a relatively early goal, and then they sat back and made little or no attempt to go after the goal that would kill the game. Luckily for them, Portugal lacked the talent and the application to make them pay. 'Tactical genius' Phil Scolari again responded to a situation where he needed a goal by taking off the only recognised striker in his team and replacing him with another winger. Portugal were poor and they deserved to lose - but doesn't that fact just emphasise all the more how disappointing England's defeat on Saturday was? The sad truth is that Portugal are a poor side, but England were worse. Having played so well against Brazil, France were a big disappointment tonight, but they're through to the World Cup final, and ultimately that's what semi-finals are all about. They're in the World Cup final and Portugal go to face Germany in the third place play-off.

Alan Hansen felt moved at full time to suggest that this World Cup has become a showcase for negative football. I disagree - yesterday's game was remarkably open for such a massive game, and it was a joy to see two sides trying to win the game outright in extra time and not hang on for penalties. What we have seen an awful lot of in this tournament though is diving: it's been all too common a sight to see players throwing themselves to the ground with minimal contact and trying to con the referee. Ronaldo has been the most obvious exponent of this, and he was at it again in this game. Having sat through this kind of stuff all the way through Saturday's game against England, it was actually quite gratifying to hear him so roundly booed by tonight's crowd (which may have contained a few England fans who had been hoping for a rather different game). Ronaldo has been the most conspicuous offender, but he's been far from the only culprit. This evening's penalty may well have been a foul, but on the replay you can almost see the thought going through Thierry Henry's head as he hesitates ever-so slightly before throwing himself to the ground. It's not an edifying spectacle. Book them and make it stop. Use the fourth official if you have to, just stop letting them get away with it.

Speaking of bookings, it's been a notable feature of both these semi-finals that the officials have been astonishingly reluctant to wave their cards around - in stark contrast to the earlier rounds. I'm all for having as many of the great players on the pitch as possible on Sunday (and it would have been disastrous to lose someone like Zidane), but the contrast is ridiculous. There were some pretty dreadful hacks this evening, and the players largely got away with it. This just served to add niggle to the game and increased the tendency to dive as players seemed to think that they were 'owed' something. There has to be some middle ground. All it takes is common sense from the officials, right?

So the final then. Could be interesting. Of the two teams, I think Italy have shown the most form. The Germans had a lot of the ball on Tuesday night, but the Italian defence kept them a comfortable distance away from their goal, and if they can manage the same on Sunday, then they should have enough up front to win the game. The French have the players to win the game, I think, but Henry looks as uncomfortable in a France shirt as he looks comfortable in an Arsenal shirt.... and they will no doubt be looking to Zidane to turn in one last performance before his retirement (if he can get around Gattuso, that is). I have a feeling that this World Cup won't be complete without one of Fabien Barthez's hopeless flaps at the ball leading to a goal. He's a total liability, and it's amazing that he's got away with it so far. Expect Totti and Pirlo to put him to the test with some stinging long shots and a few crosses into the box. By contrast, I reckon Buffon can take pretty much anything France can throw at him.

The result? I'm torn. My heart wants Zidane to end his magnificent career with a bang, but my head is saying that Italy should win. Italy then - my French girlfriend will disagree, but Italy.

Whatever. Let's just hope that both sides come out and play.

I'd like your nominations for the CUAS team of the tournament please......

To give you a few ideas, Lord B and I will be having a crack at our own team in the next couple of days, but I reckon we should try to put the official CUAS team out to the public vote. Pop your initial suggestions in the comments below. You don't need to name a whole team - just pop down the names of a few players that spring to mind as having been great in this tournament, and we'll see what we can cobble together.

Michael Owen is a shoe-in, obviously.

In no particular order, and with my memory for Argies not working:-

Zinedine Zidane
relaxing after the game!

I quite agree with your comments, ST. I think FIFA can be blamed for the refereeing mess. First they said that the reffing would be tough. Then, when the ref in the Portugal v Holland game was tough, they sent him home. As you say, quite a few tackles went unpunished - Zidane himself was very lucky to make it to the final. Glad he did, though!

I agree with El Tel about all except for Gerrard and Henry. Here are a few players who've stood out for me to add to the list: Gattuso (he and Cannavaro are my players of the tournament), Zambrotta, Pavel Nedved, Klose, Sorin, Tevez, Stephen Appiah, Torres... better stop there as you only wanted a few...

Henry divest after the merest touch, but in truth it was a foul, thus deserves the penalty But if he'd stayed on his feet [even though he'd been fouled] he wouldn't have got the penalty.

This is what narks me about Rooney's dismissal. He was being fouled by the two Portuguese players and could've fallen over and gotten the foul. But instead he tried to battle on, and inadvertantly [in my eyes] trod on one of the people who had been trying to get a piggyback from him.

Should we actively encourage our players to go down easier??

Rooney should have got a free-kick, but it was a definite stamp. And the penalty last night was clear as day, even if Henry's exaggeration was unnecessary. The Portuguese players, and Ronaldo in particular, were diving everywhere. Ronaldo's since complained that there should have been more bookings - there certainly should, for diving. Good riddance to you.

Anyway, players who've impressed me in all or nearly all of the games they've played:

If I had to pick one outstanding player from those, it would be Cannavaro. He's been awesome. Right, that's him set up for a fall in the final then...

Can't remember anyone else.