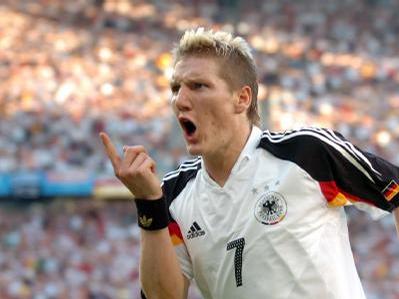 Ah, the genius of the third-placed play-off. The Germans always seemed to be more likely to be motivated to get something out of the game, and so it proved. The Portuguese played pretty well, but in the end nothing was going to deny the host nation from closing their participation in the tournament with a bang.

....and just in case Cristiano Ronaldo was wondering why people have been booing him over the last couple of weeks, and why he was robbed of the FIFA Young Player of the Tournament award a couple of days ago (won by Lukas Podolski), then he should watch a tape of this game. It's ridiculous: he's clearly a talented player, but he really does throw himself to the ground every chance he gets looking for a freekick. The good news is that this referee was wise to him and barely gave him anything for all his histrionics.

----
The 'Cheer Up Alan Shearer' Team Of The Tournament

Thanks for all your nominations for this. Here's what I thought (with a little input from Lord B, but with all his Swiss nominations omitted):

This is harder than it looks. It pains me to leave out Francesco Totti, and I've really struggled to name some wingers. Ribery has almost looked the part, but he gave away possession dreadfully in the semi-final. He gets in largely because I can't think of anyone else. I was almost tempted to put Henry out on the left wing, but then remembered his play-acting in the game against Spain and left him out. Same goes for Cristiano Ronaldo. I also contemplated putting Zambrotta there, as he used to play in the midield, and it seems harsh to leave him out of the side altogether (although Lahm's goal in the opening game really set the tone, so he's in for that). Figo gets the slot in the end because he has looked dangerous, albeit a little lacking in pace these days. His cross to Nuno Gomes tonight was a peach. I even managed to find a (big) place on the bench for Ronaldo. He's not the player he was, but he was undeniably effective in a very disappointing Brazil side.

What happened to Ronaldinho?

For reference, here's the FIFA squad of the tournament in full:

I'd criticise the selection, but given how much I've just struggled, I don't think I'll bother.

Oh, and check out this US view of the English exit from the Tournament:

"Maybe the reality is that England just isn't that good. The fact is that England has only won one World Cup, and that was 40 years ago. Maybe they've fallen behind the rest of the football world. When was the last time an English player won the FIFA World Player of the Year Award? Never, would the answer. How come there are no English coaches at the helm of a World Cup team for any nation in Germany? Why do English players consistently whither in the white heat of a penalty shootout at a major competition?"

Interesting.
Posted by swisslet at 10:09 pm

They are in a bloody big glass house her, also.

I can't see how you can leave out a keeper and a centre half (Zuberbuhler and Mueller) who conceded no goals between them. I'm just sayin'.

I'd rather have Joe Cole on my left wing than Figo, also....

Third place play-off was superb. Cristiano Ronaldo is a diver, but so is just about every other forward and I think he's been unfairly singled out amidst the tens of other players who fall over at nothing. I can't believe he wasn't given the young player of the tournament award - much better than Podolski. What happened to giving yellow cards for diving? FIFA said they were going to be hot on that and I can only remember one being given for that in the whole tournament. That might have stopped them.

Also from an American scribe, in the Observer this morning, the best prediction of the World Cup:

that, SJ, is eeringly accurate.

But then a couple of years passes, and you forget all about that and see one in a shop and think "ooh, I haven't had one of those for ages" and buy one. And realise it is horrible...

It's like that with England at major tournaments. We just forget how useless we are in the time that elapses between competitions.

We are the Topic of international football, whereas Germany are the Mars (dull, but consistent), Holland the Snickers (full of nuts) and Brazil the Lion Bar (full of interesting ingredients, but not sure they go together that well).

...perhaps Italy are like a KitKat. Effective and does a job, but not that inspiring...

ah, the Swiss. How I wish their radical 9-1-0 formation had made it further in the tournament.

I know defending we daft Americans is pointless, but I feel the need to point out that the site that article is posted on is Canadian, not American. Plus, looking at the link to the author's personal blog, he describes himself as a "long-time Canadian sports television and radio commentator... now based in London, England."

ah - my apologies. I actually posted it as I thought he had some interesting things to say and because we so rarely get an outside view, not because I wanted an opportunity to laugh at US punditry on "soccer".

...and we have the Canadians to thank for the mighty Owen Hargreaves too.