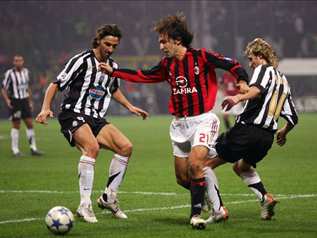 From the top of the world to the worst scandal ever seen in world football in less than a week.

That's not bad going, is it?

Four of Italy's leading clubs have been found guilty of influencing the outcome of matches by interfering with the appointment of match officials.

Worst cuplrits were Juventus who have been stripped of their last two Serie A titles, relegated to Serie B and docked 30 points. That effectively means that barring a miracle they will be playing in Serie B for two seasons and are out of the financially lucrative Champions League for probably at least three seasons.

Fiorentina and Lazio have also been relegated to Serie B with a 12 and 7 point deduction respectively. AC Milan escaped relegation but will start next season with a fifteen point deduction.

This also means a windfall for Inter, Roma, Palermo and Chievo who are now Italy's representatives in next seasons Champions League.

What it of course means is that there is now likely to be an exodus of players from these clubs, particularly Juventus. Cannavaro, Emerson and Zambrotta are tipped to join Fabio Capello at Real Madrid, Vieira and Trezeguet are set to join Lyon and other players like Buffon, Zebina, Thuram, Ibrahimovic, Camoranesi and Nedved are also likely to join the exodus. Other players set to leave their clubs include Luca Toni, Massimo Oddo, Tomas Ujfalusi and any number of Milan stars such as Gattuso, Pirlo, Kaka, Nesta and Gilardino.

It is an almost unbelievable situation. Imagine a Premiership without Chelsea, Man United, Liverpool and Arsenal (although some would say that would make it more interesting). But won't it be a hollow Serie A title for Inter or Roma or Palermo next season?
Posted by LB at 3:12 pm