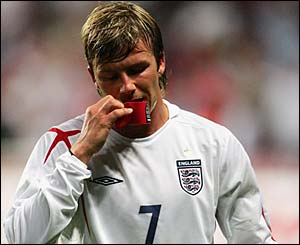 Undoubtedly a whole-hearted trier, but much like the sides he skippered, in the main he was a triumph of hype over substance. Steve McClaren is now possibly spared the tricky decision about dropping the England captain and will now be to appoint his own man to the job (presumably either Terry, Gerrard or Owen).

As for Becks, well, he'll now presumably have to find himself a new marketing angle. Never before has one man profited so much off the field from an on-field appointment. You know those little one-to-ones on the telly where the members of England's team introduced themselves and the position they played? Beckham always smirked at the camera and announced "David Beckham. Captain". No mention of any position. Given his propensity to wander around the field, perhaps Sven never told him what that was. Perhaps at the next tournament we'll actually have someone playing on the right flank, and not just a specialist captain.

So long and thanks for all the fish.
Posted by swisslet at 1:08 pm

I've always favoured centre-backs as captains, purely because they are of stronger stock and see the whole of the game, able to actually 'captain' during the game, where it seemed like Beckham was just a token captain, who was there for the toss, and the interviews but absent for any real duties during the game.

Buch from the current England set-up the choice would be for either Terry or Gerrard, with Gerrard being my personal choice.

just left a comment on you cristiano ronaldo post, 4got to say v cool name for blog. He does seem to have a bit of a miserable demeanour doesn't he?