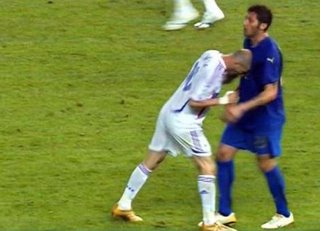 Oh Zizou, what have you done?

It had all started so well. That penalty in the 7th minute was stunning: this is the World Cup final, the game is set at 0-0 and you have the nerve to step up to face the tournament's best goalkeeper and produce an audacious chip.

You could have settled it too. If that header in the 104th minute had just been a fraction wider of Buffon, then it could all have ended so differently. But it wasn't to be. A short conversation with Marco Materazzi six minutes later was followed by that moment of madness and it was all over. What a way to end such a stunning career. What a way to be remembered. Our final glimpse of one of the legends of the game is as he trudges past the World Cup trophy on his way to the dressing room.

It wasn't a great game, truth be told. Italy looked the stronger for the first hour, but then seemed to fade badly after Lippi took off Francesco Totti and moved Camoranesi over to the left flank. From then on, France seemed marginally the better of the two sides, but it was essentially a stalemate. The fear of losing seemed to be greater than the urge to go out and win the game outright, and penalties looked a real possibility fairly early in the second half.

Nobody seemed to stand out. Matarazzi certainly had an interesting game: conceding a penalty, scoring a goal, playing a central part in the dramatic end to Zinedine Zidane and then stepping up to score a penalty in the shootout.... but did any player really stand out? Certainly not for the right reasons. 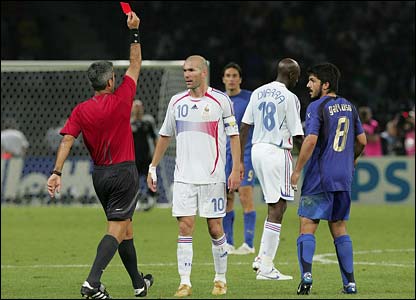 What can you say about Zidane? Our memories of this fantastic player are forever going to be coloured by his sending off. It doesn't matter what Matarazzi said to him - and he certainly said something. I know that Zidane has shown a streak of malice in the past - and I'm thinking of his stamp on that Saudi Arabian in the 1998 tournament as well as his suspension this time around.... but surely a player of that much experience could have walked away? As it was, if Matarazzi hadn't fallen to the ground after that intial headbutt, it looked like Zidane would have followed it up with a punch. Madness. The red card was surely inevitable. It looked for a moment as though the referee and the linesman had missed it, but after a short delay, out came the card and France's number 10 was off. France were stunned. I was stunned. The world was stunned. The penalties went by in a daze. The Italians have an even worse record in shootouts than the English, but this time I never really thought it was in any doubt.... with Zidane, Henry and Viera off the pitch, France were surely missing three of their penalty takers. Neither keeper made a save, and Italy were World Champions thanks to David Trezeguet's miss.

In the end, I think the best side won the tournament.... tomorrow 13 members of the Italian squad could be looking for a new club, but for tonight they can celebrate the clinching of their 4th World Cup. Will the rest of the world remember Fabio Cannavaro, probably the tournament's outstanding player, lifting that trophy?

It will all be about Zidane. 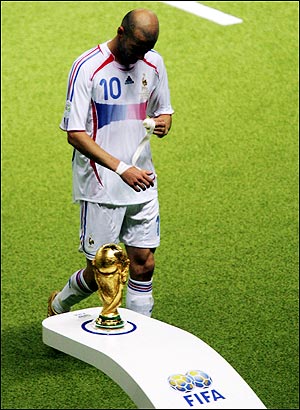 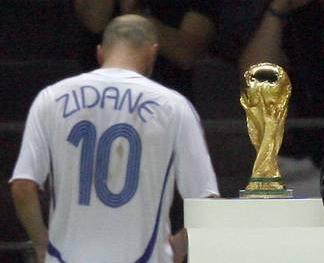 Shouldn't we be remembering this? 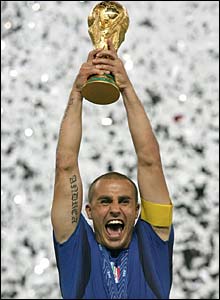 Absolutely stunning (Zidanne's outburst, not the game itself). I was glad to see the ref consult another official though. Surely the option of another pair of eyes should be used more often. It might have saved Graham Poll the early trip home if one of the linesmen had picked him up on the three yellows.

I think it was the 4th official after the benefit of a tv replay.... which makes it interesting, as they're not technically allowed to use video evidence to aid a decision.... but all the 4th officials in this world cup had access to a television and were in constant microphone contact with the referee and both linesmen (Gus Hiddink tried to have a look at a replay of Japan's goal against Australia in the group stages to try and see if Schwartzer had been impeded - but he was shooed away by the officials for obvious reasons)

It's a technicality really, as ZZ clearly needed to go... but I don't think they saw it.

That image of Zidane walking past the cup and down the tunnel is seared into my brain. What a way to go out.

...although of course, if they use replays for things like this, shouldn't they be using it for things like penalty decisions (another dubious one in this game, for starters) and for diving....red card offences.... bookings... goal line clearances.

Perhaps they should mic the players up so we could have heard what Matarazzi said to him.

"your mama was a snowblower..."

perhaps we could have a caption competition as to what Materazzi said to Zidane shortly before that large forehead was planted on his right tit?

"my surname is at least as good in Scrabble as yours..."

zidane is a douchebag, i wrote about him in my blog, kingofhate.blogspot.com

What a naughty boy. I wanted France to win the fianl, but after Zidane's sending off my allegiance went to Italy.

Who knows, we may be seeing a lot more of the Italian squad when they all sign for Premiership or La Liga clubs. [It seems the only major spending power in Italy to remian in the top flight will be Inter].

I notice you've changed the photos since you first posted this - where did you find the moment of impact one? I was looking for that for ages.

You've summed up Zidane nicely here - a genius whose malicious streak sometimes got the better of him. You'd have thought he would have been able to control the red mist in this game, though. Said to himself, "My career ends in ten minutes, so I'll let him off til we're in the bar afterwards."

I do think that the image most people will remember will be the actual headbutt rather than Zidane walking past the cup, though, poignant as it was. Poor old forgotten already Cannavaro!

14 red cards in his career, apparently... so he's not entirely unused to taking an early bath.

... and a judiciously worded search on flickr brings up most images. The "most recently posted first" filter was useful for a search on "zidane" last night, if you're really interested.

Either that or a good scan of the online sports media. I think that one might have been from Sports Illustrated actually.

Or am I giving away all my secrets now? I was kind of hoping some of you thought I was out there with my camera for all these pictures.

(the main reason for the change in images since I first posted this was that I was hunting high and low for a picture of ZZ walking away from the cup. That's the image burned into my brain)

The video evidence/use of technology by the back door point is interesting. There was a moment where you could see Zizou glimpse up at the stadium's big screen - probably anticipating or hoping to avoid the almost inevitable. Was also wondering what his comment to the referee was - may have been quite predictable, though he seemed fairly laid back by this point.

And on a related note, please allow me to share two quotes from BBC's commentary on the final:

2.
Motson: 'The Italians have abandoned their strait-jacket, and acquired the cloak of adventure'.

I have to take issue about their being no outstanding players. I thought, and said this in my post match analysis, that until his moment of stupidity, Zidane was the best player. I hope that he is remembered more for what he contributed to the game then what he took away by this act. Pippa

I'm not sure about that. I think Zidane is a lucky, lucky boy to win the Golden Ball. He was anonymous in the first two games, then suspended. Ok, so he did well against Spain, and again against Brazil but did precious little against either Portugal or Italy. I agree with ST that there were no outstanding players, but I could name a handful of Italians who were consistently better than Zidane throughout the entire tournament.

I think Cannavaro was head and shoulders above anyone else as the best player in this tournament - Zidane's performances against Brazil and Spain included. The only possible reason for giving ZZ the award must have been sentiment, surely? Yes, he made my team of the tournament.... but that's a different thing. He inspired a mediocre French team to the final, but his talent didn't burn strongly throughout the whole tournament, only in fits and starts. At his best, he's still better than anyone. But Cannavaro (and other players) were better throughout.

I think it's interesting seeing some of the stuff starting to come out about what was said between ZZ and Matarazzi too. It looks like a blow up out of not very much, to be honest, and whatever was said between the pair of them, Zidane should have been able to walk away. I'm starting to get some perspective though. He was still a wonderful player - one of the best. He had a dark-side, but he's not the only great player to have had one of them. It was a shame he went out like that, but it doesn't erase his other achievements (think how Maradona went out of the game, for example)

Gobsmacked when he did the headbutt - it was surreal. He should have just walked away...