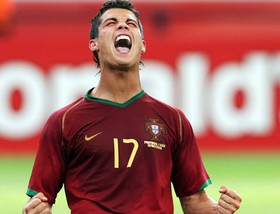 Cristiano Ronaldo spent most of this game in England's (and the referee's) face. When he wasn't running at the defenders with the ball at his feet, he was shamelessly throwing himself all over the ground looking for free kicks or needlessly imploring the referee to send off Wayne Rooney. He didn't actually play particularly well, but he certainly worked hard to make sure Portugal won the game.

How inevitable was it that he would score the winning penalty?

We played heroically after Rooney's dismissal. We absorbed wave after wave of Portuguese attacks and still managed to break forwards to create the better chances. If there is a fitter player at this World Cup than Owen Hargreaves, then I haven't seen him yet. He was everywhere. He started this tournament to jeers from his own fans, but he can leave it with his head held high. Ashley Cole too was tireless in defence and supporting the attacks. Ferdinand and Terry were heroic and generally solid. Lennon was a constant threat, injecting pace into the game and showing a great willingness to take on the defenders. Even Peter Crouch played well, ploughing a lonely furrow up-front and holding up the ball magnificently.

Did we deserve to win the game though? Really?

I'm not sure. Portugal look poor to me, and I fully expect the winner of tonight's game between France and Brazil to beat them and progress to the final. But did England really create the chances to go through? We were poor in the first half when it was 11 v 11, and we shouldn't let our magnificent rear-guard action conceal the fact that this England squad is lacking goals and invention. Sven was criticised for picking too few strikers in his squad, and even if we had come through this match, who the hell would we have played up front in the semi-final with Rooney suspended? Walcott was clearly never going to get a game. Never. Why the hell was he in the squad? Was Crouch likely to rip apart Brazil or France in a lone frontman role? Hardly.

What of Beckham? I think it's safe to assume that McClaren won't be discarding him, but he played poorly today even before he was forced off with a foot injury. His distribution was unusually slack and even his set piece delivery was woeful. It took an injury to force Sven's hand and replace his apparently un-droppable captain with a player who clearly represents England's future on the right flank.

As extra time drew to a close and Sven made his final roll of the dice, I rolled my eyes. With 90 seconds to go, the only possible reason for Lennon's substitution was that his replacement was going to be taking a penalty..... and who should trot on but Jamie Carragher. He's as honest a defender as you'll find, but in the nicest way possible, you had to fear the worst, didn't you?

Still, we would still have won the game if Lampard and Gerrard had scored from the spot. Who would have imagined that both of them would miss and that Hargreaves would score?

.... and it was those misses, together with Carragher's, that gave Ronaldo his chance to put Portugal through. Unfortunately he seized that chance with both hands.

England have been generally poor in this World Cup, but make no mistake about the fact that they had a brilliant chance of winning it: nobody left in the tournament is playing particularly well and all look beatable. With players like Rooney, Gerrard, Terry, Joe Cole, Lampard and... yes... players like David Beckham, we had a side well capable of winning the whole damn competition. But talent alone is not enough; it must be backed up by performances, and by that measure, England were never at the races. We could have won the World Cup. We really could have. That we didn't win it is partly down to bad luck -- shootouts are always a lottery -- but it must also partly be down to the manager: his tactics, his motivational skills... and yes, his squad selection.

So. Exit Sven Goran Eriksson. Not with a bang, but with an all too characteristic whimper.

..... and that winning goal for the French? Scoring pass provided to Thierry Henry by Zinedine Zidane, unless I'm very much mistaken. Zidane was magnificent tonight - and he's delivered where his successor as World Player of the Year has singularly failed to do so in this World Cup.... 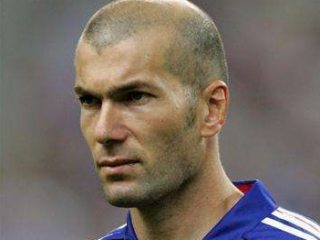 Retirement delayed for another week, and the best haircut in football plays on.
Posted by swisslet at 6:50 pm

thanks to flight BA345 from Nice to Heathrow being delayed today, I missed every last kick of the game. I listened to the penalties via a colleagues mobile phone whilst in the baggage reclaim.

I totally agree with you. We could have won this. I have racked my brains all evening for reasons why we have gone out of a major tournament again, and the only thing I can think of is the age old England problem - the total of our side is far less than the sum of its constituent parts.

McLaren to fashion a coherent side with the players at his disposal instead of picking the big names? I can't see it.

(and I hate Ronaldo, increasingly, even as a United fan. For all our sakes, Fergie, take Real Madrid's money and buy someone with more integrity and less shoulder-shrugging petulence)

As you say, the back 5 were good and Hargreaves was immense. The rest pretty much underperformed. Crouch, after he came on, did his best and that was a lot better than some of the better players in midfield, the ones (Gerrard, Lampard, Beckham) who should have taken the game by the scruff of the neck.

So, under Sven we've trod some pretty inept water. As you say, with his tactics and squad selections, he is as much to blame as the players. I don't see it getting any better under the next man.

Ashley Cole, Terry, Ferdinand, Hargreaves, Crouch and Lennon were all excellent - but Beckham was poor and as for Lampard... I'd have been tempted to drop him for Carrick, or push Beckham inside with Lennon on the right if Rooney was going to play as a lone striker.

Carragher's penalty miss was indeed inevitable - why didn't he just put it where he did the first time, before the whistle had blown? Great save from the keeper, but even then it could easily have looped up into the net rather than onto the bar. No idea why Lampard took the first one - given the game and tournament he'd had, him missing was something of an inevitability too, and it set the pattern for the whole shoot-out.

Still, there was some relief that our old boy Hugo Viana wasn't the one to do all the damage, even going so far as to miss his penalty...

I love finding other world cup bloggers. So appropriate that is was that little t*** that finished us off huh? I've done loads on this so am looking for another fans to have a bitch and moan on my blog. Feel free to stop on by. Good blog btw.

Lampard (despite playing like arse) was still our designated penalty taker, so wasn't surprised to see him step up.

Carragher and Gerrard both took penalties in the FA Cup and Champions League finals, so had more experience of pressure shoot outs than the rest.

Just a shame they all took crap penalties on the day.

Anyone else really keen to see Rooney and Ronaldo's first training session together?

Hopefully Fegie will get rid of him now, and he can become a waster at Real Madrid.

You English are always looking to blame someone other than yourselves. You use Ronaldo as a scapegoat because in all honesty your squad, minus the defenders, was crap. Watching Crouch run around on the field is a joke and says a lot about the English talent pool if he playing for England. If you want to point fingers than blame a hot headed overrated upstart like Rooney for foul play and descent towards the official. Why not blame those who cannot finish from the penalty spot. What a joke! Wake up and look in the mirror. Don't expect England to succeed in any tournament with that kind of play.