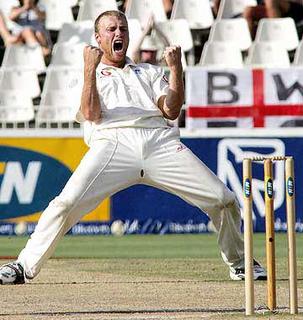 I went out for a run through a park alongside the river Trent this evening. As usual there was a game of football taking place: small boys in the park, jumpers for goalposts... you know the kind of thing.

Do you know what though? I counted four games of cricket taking place in the same park. Four! 4-1!

It's the greatest, most exciting sport in the world and what's more, isn't it refreshing to see two sides giving absolutely everything they have to secure victory for their team, but at the same time respecting the authority of the officials and generally not behaving like overpaid, spoilt babies. Compare and contrast the behaviour of someone like Andrew Flintoff with someone like Wayne Rooney. Well, there's no comparison is there? The sportmanship shown by the Australians and the English in the Ashes series has been fantastic to see: England won an amazing game at Edgbaston, and the victorious Flintoff had the compassion to commiserate with the beaten Brett Lee as the rest of the team celebrated, and the whole Australian team went into the English dressing room to share a beer and congratulate the victorious side. What do you get in football? A foodfight in the tunnel after a game. Pretty much the first thing I noticed of the new Premiership football season was Ruud van Nistelrooy launching himself backwards in the Everton penalty area about 5 seconds after his shirt had been pulled.

To be perfectly honest, I will find it a little hard to get too excited by the new football season until the cricket has finished.

Roll on the Trent Bridge Test in 9 days time.
Posted by swisslet at 11:01 pm

I sort of agree with you there and I think the English teams sportmansip in the ashes has been second to none.

I'm with you on this one too, Swiss. There's a decent article comparing the two sports up on the BBC Football site at the moment.

Now hang on a bloody minute here!
This is our FOOTBALL blog, if it's not bad enough bandying around your dangerous cricket thing, you've got bloody allies!

My view: Football - Ace
Cricket - Plop (no matter how commendable their gentlemenly actions may well be)

I don't think I agree with you (there's a first time for everything). I love footy and cricket. I think they require different temperaments and attitudes. It's to do with the nature of each game. Football is chaotic, fast, constantly on the move and it's a physical contact game. Cricket is more of a stop/start strategic game where making direct physical contact with anyone can be avoided for the entire match.

To play football in the same spirit as cricket is played would take away a lot of the intrigue and entertainment value. I've actually started to find the petty nonsense that goes on comical. Drogba, for example, made an absolute arse of himself in the charity shield by moaning about a small graze on the back of his calf. I loved watching him do so.

I only have to look at my experiences of playing both games to be able to see they require different temperaments. When I play football, I'm irritating, argumentative and gobby, both with the ref and with anyone else who wants some. When I play cricket, I congratulate the bowler who gets me out and the batsman who clubs me to the boundary.

Finally, I remember after England won the rugby world cup lots of pundits were saying "what can football learn from rugby?"

Again, this was a temperament question. The pundits were saying look at our rugby team, they're so sporting etc. Rubbish. Absolute rubbish. In that world cup final, one of our front row forwards (forgotten who) punched an Aussie in the face. He'd have been sent off and banned for 8 matches in football (a la Paul Davies a decade or so back). What happened to him in rugby? He got a ticking off.

If you took away the way each game was played, you'd be left with a worse game, I reckon.

Mike - I agree with you to some extent, and I think it would only be fair of me to point out that cricket is filled with little instances of unsportsmanlike behaviour: bowlers appealing when they know the batsman isn't out, batsmen staying at the crease when they know they have hit the ball, fielders claiming catches they know they didn't take cleanly.... and of course the sledging (or "mental disintegration"). It's not the perfect sport by any means, it just feels that the bigger picture feels nicer and more civilised to me.

Plus live test cricket is one of the greatest live sporting events you can go to.... far better than a game of football IMHO, and certainly a lot better value for money.

I'm with Flash. I love cricket, and would suggest:

http://cheerupgeoffreyboycott.blogspot.com as a home for such rambling.

Needless to say I thought yesterdays play was brilliant, however.

I am sort of inclined to agree with Mike as well. I think the better comparison is between either rugby code and football as the length of game and intensity/speed of play are similar.

I admire our cricket team immensely though for the manner in which they have handled themselves, and I think it is again a crying shame that these great role models for kids could have made a huge impression in a giant football-less summer, but has been lost amongst the start of the new Premiership season. A bad mistake, there.

but the beauty is that it hasn't been lost. go look at today's back pages.

I'm with Flash - I hate cricket. Wait all bloody summer for the world's most boring game to pack up its stumps and go, and what happens?

Yes, it invades the football season. Is that fair play, I ask you?

Cheer up, boycott Geoffrey, if you ask me.

There may be many ridiculous trends in football kits, but at least visible holes at crotch are not a feature.

Presumably they serve some mysterious cricket purpose I don't understand.

hehe I wondered if anyone would notice that!

(and I'm not off to start a cricket blog - my point here is football related, so there.)

I noticed that too but decided to stay quiet as it just wasn't cricket, or whatever the saying is.

I think I'm also upset by the fact that I don't get cricket coverage here in Singapore. Actually, that's not quite true. They showed Trescothick playing on yesterday on the Sports News. Guess what sport they're covering instead on the sports channels? The World Cheerleading Championships.

So it's football all the way for me. I'm just trying to make the most of it by being all bitter about the cricket.

I'm with Flash - can't stand cricket, so glad football is back with us!

hmmm. seeing some of this lot up close and personal, my observation (apart from them being bloody bloody tall!) is that they drink lots.

And they nab my pen!

Still haven't had it back.