Matthew Le Tissier for Southampton (vs Arsenal), 19th May 2001

I was incredulous to discover that Everton new boy Phil Neville somehow as amassed 52 England caps.

This man only ever got 8. 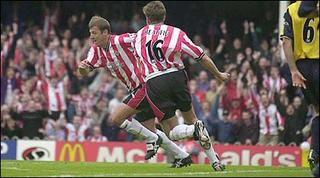 He's shown here wheeling away after scoring in the last minute of the last ever game at the Dell.
The goal gave saints a 3-2 victory over the Arse, hurrah!

Matt Le Tissier is one of my favourite players ever. He was a magician, conjuring up some of the finest goals ever seen.
He was almost unique in remaining with his club for his whole career. Some called him lazy. Fine, let him be lazy! He obviously had enough talent to justify a little stroll now & again. He also had enough talent to keep Southampton in the top flight almost single-handedly.
The fans down on the south coast call him Le God, yet he only ever got 8 England caps!

I can't believe we're two days into the blog and we're already on the topic of My Favourite Goal In the History Of Football.

It was scored by one Matthew Le Tissier on Sunday 24th October 1993. He picked the ball up on the left wing, flicked the ball up with his heel, chipped it over Barry Venison, then over Kevin Scott before calmly sidefooting it into the bottom corner.

(incidentally, later in that game he flicked up the ball and hit a dipping 30 yard volley into the right hand corner to score the winner).

If you ask him, Le Tiss' favourite ever strike was in 1994 against Blackburn Rovers when we waltzed past two players before hitting an absolute inch perfect 35 yard chip past Tim Flowers into the far corner.

8 England Caps, and all because lunatic Godbotherer Glenn Hoddle left him out for years, and then picked him to play out of position in that 1-0 defeat against Italy at Wembley which finished off his England chances.

Legend. And forever associated with the Lightning Seeds "Life of Riley" as it was the instrumental music Match of the Day used in the early 90's for their Goal Of The Month contest (incidentally, December 1994's ten Goal of the Month contenders included three by Le Tissier himself.)

Thank you for reminding me of that goal and that game. I've contemplated having brain surgery in order to rid myself of the memory. Strange how I fail to see the brilliance of it...

Thanks for the link to Black & White by the way - though it doesn't seem to be working. The full blog address is: www.blackandwhiteandreadallover.blogspot.com.

Amen to that! Bu if it's a travesty that Le Tiss only got 8, how about Steve Bruce? Ok, a contender for 'most hated manager in English football' but one of the best central defenders the country has seen, his partnership with Pallister was second to none! And yet, zero caps.

If it gives my contribution greater weight, I reluctantly admit to being a Coventry City reporter. Bring back the glory days!

Off topic: well done for NOT posting anything on today's community shield match yet. I had to open the blog tentatively with my arm over the screen cos I was afraid you might have the result up before Match of the Day and that would never do!

I'm hoping you will be similarly restrained on Saturdays - it's hard work avoiding the scores all evening, but MotD just isn't the same if you already know what happened.

That wouldn't matter if I got to see more matches live, but I'm skint and rely on Lineker, Hansen and co. *sighs*

If you are posting on Saturday afternoons, can I suggest a really ginormous "look away now" warning?

On topic: didn't Le Tiss score one direct from a corner once? I'm sure I remember seeing that.

Wasn't he engaged to Marilyn from Home And Away? It was one of the strangest pieces of news I'd ever heard.