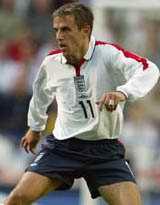 So. It's the end of an era. Phil Neville has broken the umbilical cord and left the MU Rowdies to head over to Everton.

Has a player with a smaller talent ever been so decorated? 386 games for Man Utd, 6 Premierships, 3 FA cups, the European Cup and an amazing 52 England caps.

He's also captained England a couple of times (presumably when all other 10 players have left the pitch and not been replaced).

52 caps. George Best only got 37 caps for Northern Ireland, so I guess that makes Super Phil 15 caps better and counting, yeah??
Posted by swisslet at 11:46 pm

I should add that not everyone at this blog supports Manchester Utd. I know it looks bad at the moment, but I swear it's not true.

I have to say that my first emotion on hearing this news was to be a little sad.

And then I remembered how much of a vaguely talentless clogger he actually is, and wish him all the luck at the School of Science.

and how long did it take you to find a goal of his? heh heh heh

This will either be the making of him as he flourishes outside of the smothering environment at Old Trafford, or he'll disappear. I think the latter, and have done for about 5 years. He could have transferred to Sunderland and he wouldn't stand out.

Dunno anything about Phil Neville but he aint pretty.

Aha! Should have read this comments box before commenting on the first post - glad to hear you're not one of Glazer's minions Swiss! Will you be divulging your own allegiance?