So, in the pouring rain of a sleepy Staffordshire market town this afternoon, a football club was born. A club formed less than two months ago by a group of impassioned football fans disenchanted with an American takeover of their own beloved football team. Whilst their PLC was being indebted to the tune of £500million, they worked tirelessly and in under eight weeks raised enough money from fans donations to start a brand new club. 930 players applied to join the squad. 260 were invited to trials. 700 people attended the clubs first general meeting.

At 3.15pm this afternoon at Harrison Park, Leek, FC United of Manchester took their first step on their route to the Barclays Premiership, a mere ten promotions away. This was the Moore and Co Solicitors North West Counties League Second Division where the average crowd in 2004/5 was 75. United Buccaneers were playing in front of 40,000 at Goodison Park. 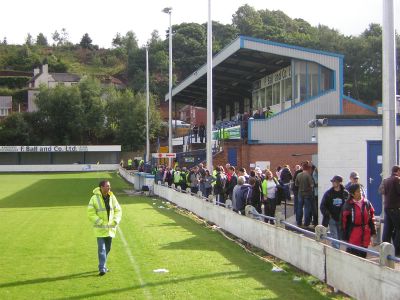 Harrison Park (which sounds like something from a Raymond Chandler novel) is Leek Town's ground, although it is shared with Leek CSOB who were the opposition today. (Leek County School Old Boys, to give them their full title. Formed in 1945, you know.)

We arrived in Leek at about 1pm in absolute torrential rain and sought refuge in a local hostelry for a quick drink. Lord Bargain's mum and daughter Madeleine here in the White Lion, Leek. 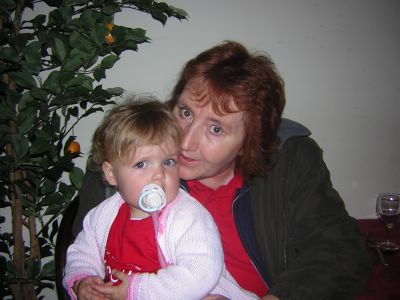 Bearing in mind we had someone celebrating their 18 month birthday today, we went into the ground early in order to get three good seats in the Main Stand. I had paid £6 each for the tickets, compared to the £24.50 I pay at Buccaneerseers. Leek CSOB's average crowd last year was 70. There were 2,500 at the game today netting them over £10,000 in gate receipts.

The first stop was the catering hut. Now, on the odd occasion I have used the refreshment facilities at Glazer Field (sorry, Old Trafford), I have spent £1.60 on a weak lukewarm cup of tea, and £2.00 on a limp soggy meat pie. Frankly rubbish.

I got chatting to a very nice lady on the catering stand, and ended up with two trays of meat and potato pie, chips and mushy peas and two large teas for £4.10. And it was fantastic. 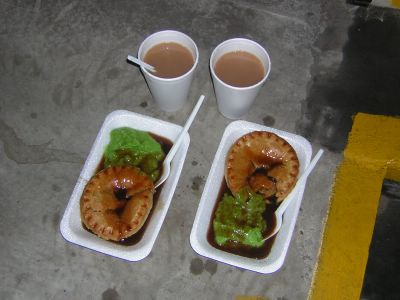 Out came the two respective teams to warm up, and for the first half an hour our concentration was taking up trying to determine which team was which. The team in the dark sweatshirts were doing all sorts of tricks and looked pretty cool, whereas the ragbag team in white shirts had a couple of kids on the pitch and a very fat goalie. Sure enough, the white team turned out to be United. A cool away kit, though in a 1970s Crystal Palace style, with a white shirt and diagonal black sash.

At 2.45pm an announcement came over the tannoy. "Just to let you know the result from Goodison. Everton 0, that other lot 2. Oh, and for safety reasons the kick off will be delayed by fifteen minutes." So, to kill time the United players attempted the Crossbar Challenge, trying to hit the crossbar of the goal from the half way line. Maddie was also getting involved, cheering randomly from her own seat. 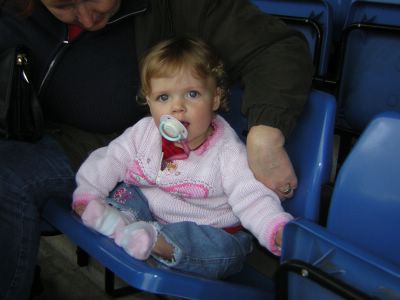 And at 3.15pm, we kicked off. The standard was better than I anticipated, although it was frenetic and neither team had a lot of time on the ball. The teams felt each other out and, slightly against the run of play, Leek took the lead in the 20th minute when a mistake on the half way line let them in for an easy finish, Colin Fletcher beating the keeper from close range.

FC United hit back and levelled within five minutes with Steven Spence's excellent drilled shot from the edge of the penalty area . Ten minutes later United went 2-1 up after a clanger from the home goalkeeper spilled the ball into the path of Jon Mitten.

After 40 minutes, the main bright spot of the first half. One of the floodlights adjacent to our stand started shedding bulbs and assorted bits onto the touchline.

Just as half time was approaching, Leek hit back with an excellent long range drive from Jake Johnson which the keeper looked like he had covered but only succeeded in palming the ball into the net.

Half time, an entertaining 2-2 scoreline.

It was interesting also to hear the chants from the FC United end of the ground. I thought this one summed up the day perfectly:

The second half was a totally different game. Leek CSOB hardly got past the half way line, and though it took United until the 68th minute to restore their lead, they had threatened right from kick off. The Leek keeper had made a couple of smart saves before Steven Spence hit another well struck shot from the edge of the area which landed in the corner of the net via a cruel deflection. 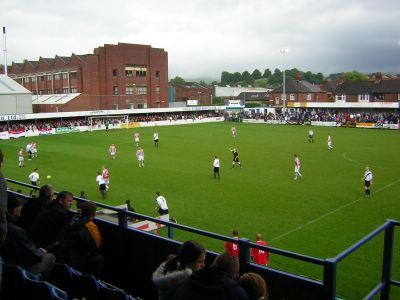 We were also treated in the second half to a good view of the fattest linesman I have ever seen in my time watching football. 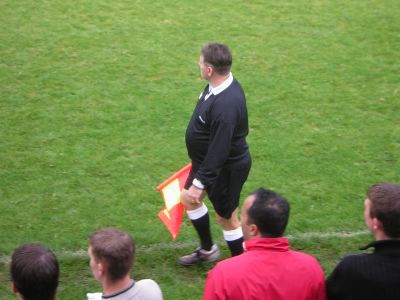 And then as both sides made substitutions, and the sun came out, United started to play some excellent football and added two more goals, an excellent direct free kick from Steve Torpey and a smart finish by substitute Adie Orr.

United look well equipped to do well in this league. Some of their starting XI have dropped several leagues to play for the new United team, and you could tell in some of the skill and general knowhow. The weak link looked to be a somewhat shaky goalkeeper and some occasionally hesitant defending, but in midfield and attack there seemed to be a good balance of flair and graft. So, the majority of the 2,500 crowd went home happy, including me, my mum and an eighteen month old girl having seen her first match.

Like I have said before, I am not going to stop going to the Buccaneers. In fact I will be there for the Villa game next Saturday. However, with lovely people, a family atmosphere, a crowd who played and flirted with my daughter all afternoon, seven goals, a great meat pie and no extortionate car park or two hour queue to get in and out, I may well go and watch some more of the new United. How football should be.....
Posted by LB at 10:19 pm

Hurrah, finally a team in Manchester that I might be able to support, without alienating my Scouse mates! ;)

Hello. Sorry to contact you this way. I’ve surfed blogs for ages and made many friends but someone has just told me that if the kind people out there would click a link to my Wedding Photos Northampton site, it would help my search engine ratings. I do appreciate you’re probably not in the least bit interested in Wedding Photos Northampton related stuff, but if you’ve time to take a look, I would value your opinion on my site. If my contacting you in this way offends, please accept my apologies and delete this comment. Take care!

Have spent ice cold winters eves at Harrison Park. By the wet spring the pitch is best suited to the long ball game. Re FC United... who'd have thought it - a Manchester team with broad appeal...

Sounds like a cracking day out. Not to mention quality pies.

I do like this idea of clubs being started up by a bunch of ordinary people for the fun of it.

Of course there has been lower level "non-league" clubs, sunday football in the park clubs, pub teams and so on for ages, but that's always been about the players (and fair enough).

You can't imagine 2,500 people suddenly adopting them as a team to support. But one started by the fans, that's another thing entirely - going to watch the match is what it's all about.

That's an amazing turnout for an away game (I'm assuming they were mainly from FC Utd, though perhaps Leek pulled in some extras for the occasion too.) Wonder what the home gate'll look like.

I am waiting for AFC Passports of Pimlico, giantkilling FA cup winners in 2015.

Shame that the Staffordshire boys didn't cut it, but I'm pleased you had a good day over in my home county.
It'll be interesting to see how the country perceives the new team. AFC Wimbledon is certainly far more popular with other team's fans than Wimbledon was (even before the Milton Keynes thing happened).

Well well - just checked out FC United of Manchester's website and discovered that their home ground is Gigg Lane, which isn't too far from where I live.

Well, I did say I wanted to see more pictures, didn't I?

Those pics reminded me of going to hockey games as a wee tot and having to sit on everyone's winter coats in order to be tall enough to see.