Well then, the transfer that everyone has been waiting for has finally happened.

As soon as the delighted player has been paraded in front of the starstruck fans, and the transfer window slams shut, we can get back to the serious business of the watching England making hard work of qualifying for the World Cup. 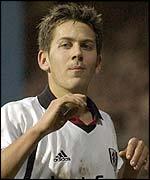 Yes. Jon Harley has finally completed his move from Sheffield Utd. to Burnley for £75,000.

Okay. Maybe that's not the most interesting transfer that's happened today (although, by the by, what happened to Jon Harley's career? It seems like only a couple of years ago that he was at Chelsea and had a bright future in front of him. £75,000 is not a lot of money for a player, even in the Championship).

In case you've had your head in a hole for the past month, the Michael Owen saga has finally been concluded with his desperate, undignified last minute scramble to sign for the only club that really wanted him. He's moving to Newcastle for £17m, about a year after Liverpool sold him to Real Madrid for about half that.

It's World Cup year, and Owen clearly felt that he could not afford to spend another season sitting on the bench at Real Madrid, a club where he just wasn't exciting enough to warrant a starting place, in spite of his pretty good goalscoring record. Initially, it looked as though he was playing it very smart: he released a statement that made it clear that he would ideally like to stay at Madrid, but that failing that he'd love to go to Liverpool, and failing that he would go to Newcastle on loan. This was intended to keep the Madrid fans happy, invite Liverpool to buy him whilst also making it clear to the fans that if he ended up somewhere else, it wasn't his fault. He was never seriously going to go to Newcastle.

And now he's at Newcastle, on a 4 year deal presumably riddled with get-out clauses. The simple truth was that no one wanted him. He's one of the most effective strikers in the world. He is England's 4th highest goalscorer of all time. He is only 25 years old. Nobody wanted him: there was no real interest in Spain. The Italian clubs felt that he was too one-dimensional and didn't have a good enough all round game to break the more disciplined defences of Serie A. Although many at Liverpool clearly wanted to sign him, Benitez was very ambiguous about it, and kept remarking how his priorities lay elsewhere. In the meantime, Newcastle have played a blinder. Owen had stated that he would only go there on loan, but the club offered Madrid £17m. It looks a ridiculous amount of money, but it effectively guaranteed that Liverpool would be priced out of the market. Why would Madrid accept £8m when there was twice that on the table? The fact that there were no other offers would force Owen to look again at heading to Tyneside.

It may be a marriage of convenience, but make no mistake about it: Souness and Shepherd have pulled a rabbit out of their hats here. At a single stroke, Newcastle's season could be turned around. They desperately need goals in their side, and Owen will surely provide those. The signing of Luque is potentially a good one, but he will be equally useful to the club on the wing, with Owen and Shearer marauding up front. More than all of this though, they are a club that have always idolised their centre forwards, and in Shearer's final season, the fans will have a successor to cheer; the handing over of the crown of King of Tyneside to the younger man.

This could also be a good move for Sven Goran Eriksson and England: Owen needs football if he is to be sharp for the World Cup this summer, and Newcastle Utd should certainly be able to provide that.

Interesting. But at the same time, also quite boring. Much like Owen himself.
Posted by swisslet at 8:05 pm

Jon Harley?
eh?
He's not an ex-Stoke player... what's up with Cotterill? Run out of options with our squad? I did a double take when I checked Ceefax on Saturday night:

This won't mean anything to most of you - but Cotterill (blimmin quitter that he was) is an ex-Stoke manager and all three of the above players were in red&white last season.

Ah well. We played bloody good football at times last night, and beat Norwich 3-1. So glad I made the effort to get over to Stoke.... Rounded off my weekend of live sport-spectating very nicely, thank you.

Oh yeah - that Owen fella?
Whatever.

Premiership - overrated if you ask me. Even the beeb has seen sense this evening. Spot the deliberate mistake when you click on the Championship link on the beeb's sports pages:
http://news.bbc.co.uk/sport1/hi/football/eng_div_1/default.stm:

In case they've corrected it by the time I've posted this:

Now - since you've brought it up - if Glenn Hoddle thought that Michael Owen wasn't a natural finisher, I can only think he must think he's finally found the real deal with Carl Cort, eh?

have you been drinking by the way?

No?
Why?
Am I making less sense that usual?
Must be the lemsip.

I don't mean to by cynical, but Michael Owen has done a *bloody* good job today of "looking extremely pleased to be joining Newcastle United."

Don't get me wrong, it's a brilliant signing for Newcastle, but you can't help thinking the little fella would like to be somewhere else, eh?

the signing of Nolberto Solano could prove to be the real masterstroke here. I was never quite sure why Newcastle let him go, but getting him back to feed Shearer and Owen is a fantastic idea.

maybe they should get Laurent Robert back too.