Again going back to Red One's comment about avoiding the results on Saturdays, allow me to share my philosophy on the issue.

Much like Red One, I go to all sorts of lengths to avoid hearing the results simply because Match of the day holds no appeal at all if one already knows the scores. The biggest downside of this came last year when I often didn't find out how my boys had got on until Sunday morning.
The upside is obvious.

Sometimes though Match of the day gives one hell of a ride.

Back in April, I was round my friend's house as I often am on Saturday nights. By 10.30 Reckless (that's his name!) & I had consumed several Vodka's & smoked one or two jazz fags. We settled down for Match of the day.
Initially we were far from thrilled that the main match was Newcastle Vs Villa.
Little did we know what was instore.
It started brightly enough when Jaun Pablo Angel opened the scoring after only 5 minutes, putting the proverbial cat amongst the disease ridden birds. The fact that we actually saw Angel scoring a goal would normally be shocking enough!
In truth the remainder of the first half offered little else in terms of entertainment.

The second half was a different story altogether. 2 minutes in & the ref waved away the Toon's appeal for what looked a stonewall penalty. Eee, we did laugh.
This was one of 3 really good penalty shouts that Newcastle had. All 3 were turned down. By now Reckless & I were pissing our collective pants as we watched Souness getting progressively closer to another run in with his cardiac specialist.
We were really enjoying this. Any excuse to laugh at one of football's most dislikeable characters.
Still it just kept on getting better.
In the 72nd minute Darius Vassell saw his goalbound shot kept out by Steven Taylor's hand. The hapless defender then feigned being shot! It was fantastic, he really did clutch his stomach & writhe about as if poleaxed by a sniper's bullet. Ace! By now Reckless & I were pissing the whole of Northampton's collective pants.
When confronted by the red card he simply got up & sheepishly scuttled off the pitch, abandoning his cunning "honest ref, I never handled it but I did get shot" plan.
Gareth Barry stepped up & duly put Villa 2-0 up.
With the Toon down to ten men & trailing at home to a very average Aston Villa side you'd be forgiven for thinking that things couldn't get any better for the viewers.
Five minutes later & Newcastle conceded another penalty! Barry again dispatched the spot kick to give the visitors an unassailable 3-0 lead.
My friend & I had already agreed that this was quite possibly the funniest, most rip-roaringly entertaining Match of the Day ever when all of a sudden Lee Bowyer biffs his team mate Kieron Dyer! After everything else that had happened we were now treated to the sight of 2 of Newcastle's remaining players actually having a fight in front of 52000 people! Utterly stupendous! Believe me, if there were any dry pants in the county of Northamptonshire, we would have pissed them. I can declare without fear of contradiction. I have never, ever laughed so much while watching football.
To his enormous credit, Aston Villa's Gareth Barry (universally acclaimed as Man of the match) separated the dueling twosome before the ref quite rightly sent them both off, reducing Newcastle to 8 men.
When the final whistle went, we still had the pleasure of the press conference to come. Hurrah! 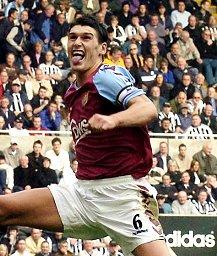 So what's the point I hear you cry.
Well, If we'd had not avoided the day's footy news then we would never have such a truly memorable & hilarious Match of the Day experience.
Posted by Flash at 6:20 pm

watching those two muppets having fisticuffs was one of the funniest things I have ever seen. I was the other way, I heard about the scrap after the game and deliberately settled down for MoTD to watch it in all its splendour...

Me and my fellow Leeds supporting mates who I go to matches with were sat in the car queueing to get out of the car park after the Leeds game that afternoon when the Radio Leeds announcer said "and it's over to St.James' Park for what sounds like an extraordinary game" when the match commentator up in barcode-land told the story of Ratboy & Dyer scrapping we just fell about laughing. And it sure made entertaining TV later that night.
Sometimes its and advantage to know what's going to happen before MotD starts so you can look forward to events like this. Especially as MotD isn't essential viewing if your team isn't in the Prem anymore ;-)
(Saying that, when Leeds were in the Prem I only watched if they didn't lose. Suffice to say I didn't see many shows in Leeds' last season before relegation!)

Unsurprisingly, as a Toon fan I was not amused by that match. Very cruel of you to bring it up, Flash.

It reminded me of when Batty and Le Saux had a fight on a Blackburn Trip to Moscow in '95....Brilliant.

Even for Bowyer vs Dyer, it was better to have the entertaining surprise sprung on me by MotD.

I did read extra newspapers the next day to get the benefit over and over again though.